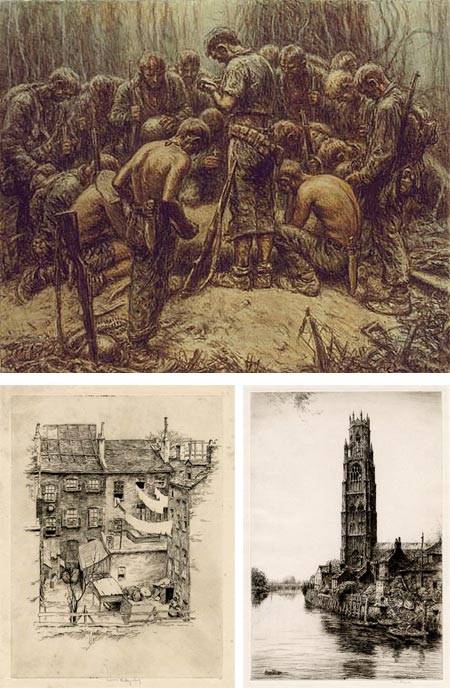 For the benefit of those in other parts of the world, I’ll point out that today is Veterans Day here in the U.S., a day set aside to honor those who have given or risked their lives, endured hardships and put themselves in the service of their country in military service.

The same date, November 11, is also observed in many other countries as Armistice Day or Remembrance Day, a date taken from the signing of the Armistice that ended World War I.

Harold Kerr Eby, usually known as simply Kerr Eby, was an artist who made first hand observations of both World War I and World War II, the former as an artist/soldier, the latter as a civilian member of the combat art program sponsored by Abbott Laboratories (see my posts on They Drew Fire: Combat Artists of World War II and Art of War: Eyewitness U.S. Combat Art From the Revolution through the Twentieth Century).

You can see his impressions of World War I in the form of his dark and emotional etchings, done after the fact but carrying the weight of first hand observation. His World War II images (image above, top) were more direct, often done on the spot with charcoal, pencil and other dry media, with piercing observations of the horror, extremes and physical and emotional fatigue suffered by the soldiers.

Eby was born in Japan, where his father was as a missionary for the Canadian Methodist Church. He studied at Pratt Institute and the Art Students League in New York, at the later studying with George Bellows. He also frequented the Cos Cob artist colony in Connecticut and became friends with Childe Hassam, giving lessons in etching to the senior artist.

He enlisted in the Army and served as ambulance crew during World War I (known at the time as “the war to end all wars” because of its horrible scale; little did they know).

Eby was never officially commissioned to cover the war as an artist, but recorded many of his impressions on his own, later rendered into a series of lithographs that were published as a book.

At the entry of the U.S into World War II he attempted to enlist again, but was over the age limit. Instead he participated in the combat artist reportage program in the Pacific, landing with the Marines at Guadalcanal and Tarawa. He died of a disease contracted while covering the war.

In between the wars, Eby created a a body of work, apparently mostly in the form of etchings and lithographs. If he was a painter to any great extent, I’ve been unable to find any examples.

His etchings, though, are wonderful, with scenes from his trips abroad as well as domestic subjects, and to my eye showing the influence of etchers like James Whistler and Joseph Pennell. The best display of these is on the Old Print Shop site.

There is a long series of Eby’s drawings from WW II on the Navy Art Collection. (The server can be a bit slow, give it time, and note the links to multiple pages at the bottom.)

At times while looking through Eby’s WW II battlefield sketches, I found myself thinking about Gustav Dore’s illustrations for Dante’s Inferno, not from any stylistic similarities, but from the emotional weight of the images.

These are the hardships we’re called on to remember and honor on Veterans Day.