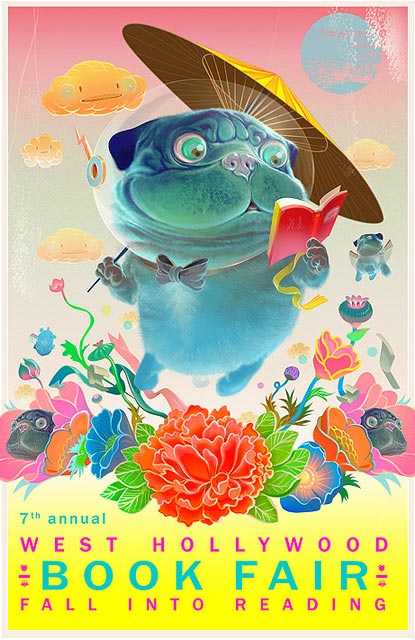 Ronald Kurniawan is a Los Angeles based illustrator who graduated from the Art Center College of Design in Pasadena.

His characters careen, gambol and fly through unlikely environments, alternately alive with insane glee or oppressed with the weight of imminent doom. Likewise his palette and textural range varies from grungy to pop-radiant, with lots of lively variations in between.

There are several sections of imagery on his site, along with sections of sketches, sculptures and available books of his work.

Kurniawan also does gallery work, and a number of his pieces will be on display as part of the upcoming Line Weight group show at Gallery Nucleus in Alhambra, CA from November 22 to December 7, 2008. Though many are already sold, there are items of his available in the gallery store.

There are interviews with Kurniawn on Websteem Art & Design and FMCS, and a profile on Illustration Mundo.

(Image above is a poster for the West Hollywood Book Fair, illustration by Ronald Kurniawan, graphic design by Ryan Ward.)