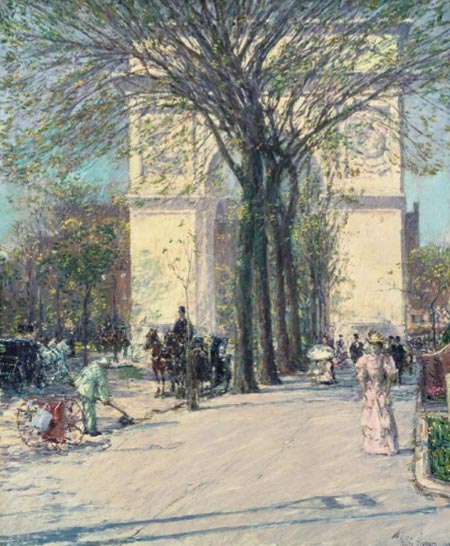 Those who have been reading Lines and Colors for a while will know that I have a particular fondness for many of the late 19th, early 20th Century painters referred to as “American Impressionists”. (I put the phrase in quotes because I doubt the painters ever referred to themselves in those terms.)

The Phillips Collection is a museum collection in Washington, D.C. that has strengths in that time period in both modern and Impressionist works from Europe and America.

A selection of American Impressionist paintings from the collection has been arranged into a traveling exhibit, and is currently on view as the Oklahoma City Museum of Art.

The Oklahoma City Museum has an online feature that displays some of the paintings in the exhibit, with a voice over narration about the works and the artists.

In many cases, like Childe Hassam’s beautiful painting of Washington Arch, Spring (image above), there is a more extensive feature and a Zoomable version of the image (also see my post on Childe Hassam).

In addition to Hassam, the exhibit includes works by Theodore Robinson, John Henry Twatchman, Julian Alden Weir, Ernest Lawson, William Glackens, Helen Turner and Gifford Beal. I was pleased to see that some of the “Pennsylvania Impressionists” were included, like William Lathrop, John Folinsbee and Robert Spencer. There is also at least one piece by George Inness, though he was not an Impressionist painter.

American Impressionism from the Phillips Collection is on view at the Oklahoma City Museum of Art until January 18, 2009.

The exhibit will then travel to the Society of the Four Arts in Palm Beach Florida from March 13 to April 15, 2009; and the New Mexico Museum of Art in Santa Fe from June 5 to September 13, 2009.

There is a 192 page book accompanying the exhibit, American Impressionists: Painters of Light and the Modern Landscape by Susan Behrends Frank, though it doesn’t seem to be in stock from Amazon; it should be available at the exhibit in all of the locations.