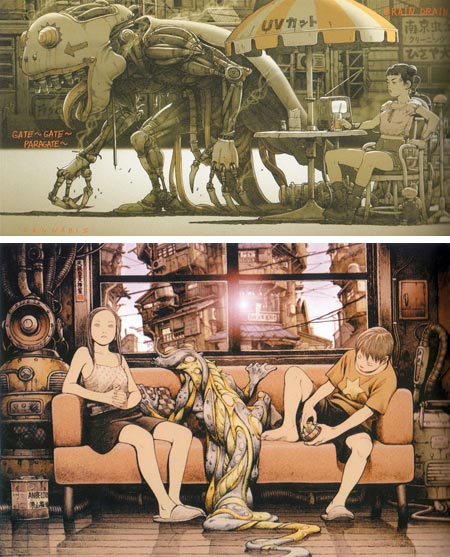 Tatsuyuki Tanaka is a Japanese animator, illustrator and comics artist who was one of the animators on the landmark anime Akira; and has done key animation, storyboarding and concept design for a number of other animated films, including directing sequences for the anthology anime Genius Party Beyond, which also includes a sequence by one of my favorite anime directors, Koji Morimoto.

I’m a little shaky on the particulars because so much information is in other languages, but I believe Tanaka is associated with Morimoto’s Studio 4C production company. (There is a page for Tanaka on an unofficial French site devoted to Morimoto and Studio 4C here, Google Translate English here).

There is a new book of Tanaka’s work called Cannabis Works which I think is a combination manga (comic story) and art book. It’s easier to find excerpts of the book online than it is to find copies for sale. Amazon lists it as though it were unavailable in the US, but I did find it on the Anime Books Yahoo Store for $31.00 U.S. (I haven’t ordered from them so I can’t give a recommendation.) His comics also appear in an anthology comic called Boiled Head.

Tanaka draws with a refined style that is almost European, without the excessive stylization often associated with manga and anime. He is also a master of the hyper-complex backgrounds and machinery that often make Japanese comics and animation dazzling eye-candy. Tanaka is feverishly imaginative, like a blend of some of the best characteristics of Katsuhiro Otomo, Masamune Shirow and Jean “Moebius” Giraud.

Tanaka uses a muted, restrained palette to great effect in a number of his images, almost to the point of being monochromatic, creating darkly cinematic moods and otherworldly atmospheres.

Digik Gallery has a gallery of large images from the book, Pink Tentacle has a short, rather trippy sequence here, and I’ve listed some other resources below.

[Via Articles & Texticles and io9]