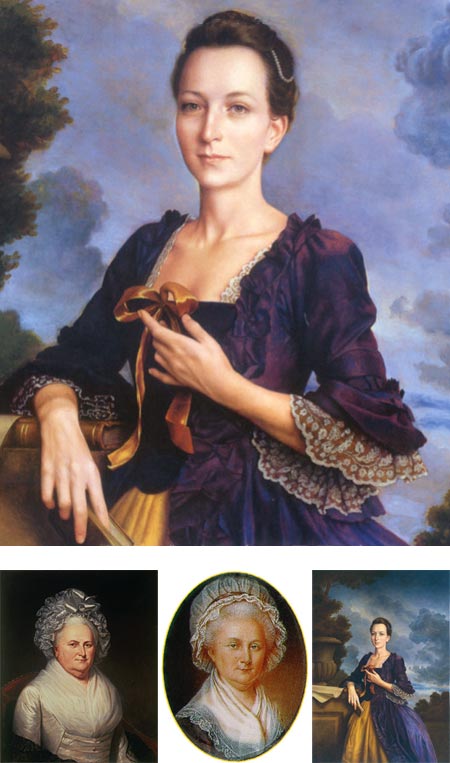 It’s President’s Day here in the U.S., and though it’s nice to contemplate the changes that will hopefully come from the presence of a new and very different president, the holiday is dedicated to past presidents, most specifically the first U.S. president, George Washington, whose birthday the holiday marks and was originally named for.

The wives of presidents were also the subject of official portraits, which are likewise the source of our image of them. This view is always limited by the timeframe of the portraits, which were usually commissioned while the president was in office, or even posthumously, Consequently, our image of these figures is often of individuals in their advanced age, as there is often no portrait recording their appearance in their youth.

Such is the case of Martha Washington, George Washington’s wife, whose visage we know from the portraits Charles Wilson Peale (image above, lower left), and his younger brother James Peale (above, bottom center) as well as an unfinished portrait by Gilbert Stuart.

Author Patricia Brady, in the course of researching her fresh historic look at the original First Lady, Martha Washington: An American Life (more detail here), asked forensic anthropologists at the Louisiana State University Forensic Anthropology and Computer Enhancement Services (FACES) Laboratory, who often do computerized age progressions (for instance, to determine what kidnapped children might look like as they get older), to do a computerized age regression of Martha Washington; based on the watercolor on ivory portrait by James Peale (above, bottom, center), which her grandchildren reported was a “striking likeness”.

By comparing bone structure, facial dimensions and proportions of features, the lab was able to produce an image of her likely appearance in her twenties.

The result was then used as a basis for a new portrait by illustrator Michael J. Deas, who has painted other portraits of historical figures from U.S. history; giving us a new image of Martha Washington as a vibrant, strikingly attractive young woman on the eve of her wedding (image above, lower right, with detail at top).

This image was subsequently used as the cover of Brady’s book, and prints of the image can be ordered from Deas’ web site.

Deas has shown her in a reconstruction of her wedding dress, and in a pose that she might have been asked to take for a painter of her time.

Here we see an image of the slim, charming, and strong young woman who ran five plantations after the death of her first husband, bargained with merchants, haggled over tobacco prices and followed her new husband into battle, and of whom patriot, soldier and future first president George Washington was deeply enamored.