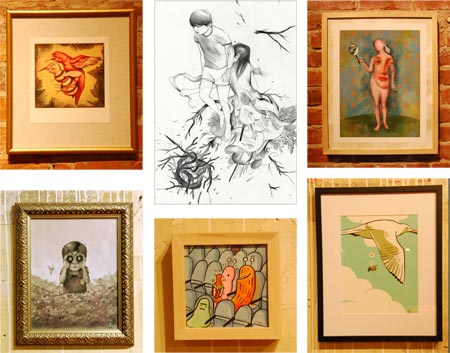 The Sheridan Illustration Council (which, if I’m not mistaken, is part of Sheridan College in Ontario, Canada), is holding an exhibit themed Birds and Bees as a fundraiser for the benefit of the 4th year graduating class.

From the press release:

The Sheridan Illustration Council proudly presents the Birds and the Bees Fundraiser Group show. The show features work from Sheridan alumni and faculty, consisting of well-known and emerging illustrators belonging to the fields of illustration, fine arts, comics, and much more. The hopes are to be able to raise funds to help put on a successful year-end show for the 4th year graduating class.

The show will offer collectors and new buyers the opportunity to acquire original artwork from renowned illustrators, and a chance for them to help support the next generation illustration stars.

The show is at SMASH Industrial Salvage|| Jerome Jenner Gallery, 2880 Dundas West, Toronto, ON. I’m a little late in listing the actual show, the opening was March 20, and it only runs to this Saturday, April 4, but the online version will be up until April 11th, 2009.

There is a listing of artists and an online gallery.