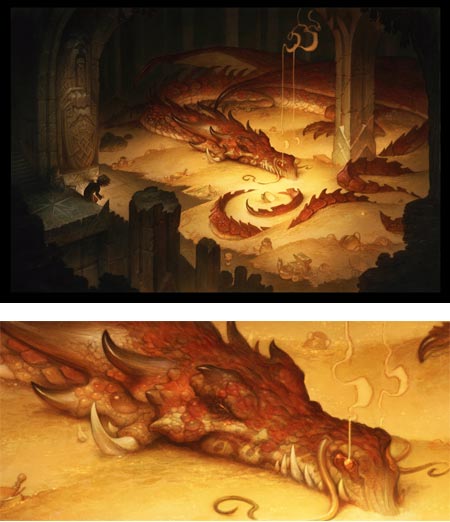 Justin Gerard is an illustrator about whom I have little background information. His web site has galleries of his beautiful fantasy themed illustrations, but lacks a simple bio.

His blog has some fascinating details, like his confession about swiping a copy of a Step by Step Graphics from a college library because of an article on the art of Gregory Manchess that Gerard found dramatically influential; and his hope to somehow atone with his contribution to this year’s MicroVisions art auction in support of the Society of Illustrators scholarship fund (more the MicroVisions auction in a subsequent post).

I also found an interview with Gerard by Irene Gallo on the Tor Books site, in which Gerard discusses his project to create illustrations of his own interpretation of The Hobbit, apparently as a personal project, which I find amazing (image above with detail below, larger version here). If this work is not slated to be printed in some form it certainly should be, even if as a self-published version through Blurb or something similar (I’d certainly buy a copy).

In other sections of his web site gallery, I found wonderful fantasy illustrations of various subjects and a section devoted to illustrations of Beowulf, as well as the series from The Hobbit.

Gerard’s illustrations are intricately textured, make great use of chiaroscuro and leverage the power of a limited palette to produce drama and control focus. His style, though based on intensely observed realism in some respects, has a feeling of whimsey and charm that is ideally suited to his subject matter.

I also found a number of books that he has illustrated on Amazon, and a gallery of his work on the Tor Books site.

I finally found a brief bio on the site of Portland Studios, an illustration, animation and interactive firm of which he is a part. From it I learned that Gerard lives in South Carolina and won an IPPY Award for his interpretation of Beowulf Book One: Grendel the Ghastly. There is also an animation called The Mad Bull on the home page of the Portland Studios site for which he is listed as co-creator.