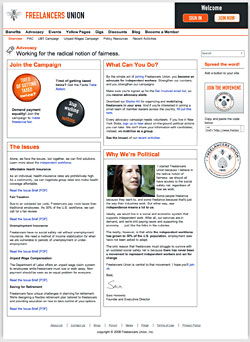 One of the issues facing working artists is that many of us are self-employed, a state that brings with it some of the logistical difficulties faced by almost all self-employed workers.

Most notable among them are things like health insurance, which can be a make it or break it factor in the ability of artists to support themselves.

There are other factors, like retirement savings and an unfairly high tax rate on self-employed people here in the U.S., based on various government excuses, the gist of which are that the government assumes that we’re cheating in some way.

Membership is free and open to all freelancers, consultants, independent contractors, temporary and part time workers and anyone who is self-employed.

The Freelancers Union offers access to group health, dental, term life and disability insurance, and in the state of new York is acting as it’s own insurance provider. There are also seminars, workshops, networking events and a member directory and gig listing, as well as offers of discounts with Staples, Zipcar and other companies.

I learned about the Freelancers Union from a story on the NewsHour on PBS.

I can’t speak about the organization from personal experience, at least not yet; but I intend to join, even if only to learn more.