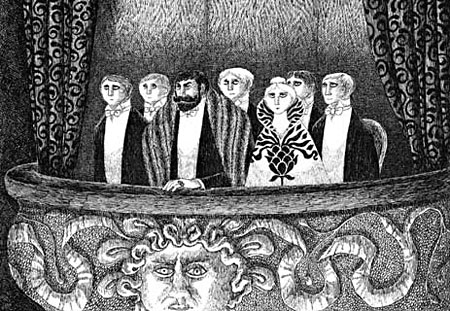 Perhaps you’ve seen his unforgettable drawings in the introductory animation for the PBS Mystery! series (animated by Derkek Lamb); perhaps you’ve seen one or more of his over 75 published books; or perhaps you’ve somehow encountered stray examples of his wonderfully eccentric pen drawings, filled with enigmatic figures in long coats or longer dresses, as likely to hold a knife as a croquet mallet (though either could be equally suspicious of being a murder weapon), and children of questionable intent and even more questionable future; and, of course, perhaps you’re already a devoted Edward Gorey fan.

Gorey himself was something of an enigmatic figure, considered eccentric by some, with a perhaps undeserved association with grim, morbid or horrorific work, when in fact his work has always been whimsical, with just a twist of macabre humor.

Gorey’s wonderfully retro drawing style, at times spare, but often filled with luxurious swaths of pen and ink texture, lends itself perfectly to his off-kilter view of the world and the charming denizens with whom he populates it.

His small, utterly charming and disarming picture books (which you may or may not consider children’s storybooks, depending your thoughts about books in which terrible things happen to the children involved), are wonders of wordcraft as well as spellbindingly drawn. The seemingly simple haiku-like captions make you pause, and pause again, while a slow motion laugh arises, ghost-like, from the bottom of your brain pan and finds its way to your mouth as you stare.

Gorey is sometimes associated with Charles Adams, the two were acquainted and shared the same literary agent as well as admiration for each other’s work. An association I like to make is with the wonderfully off-kilter cartoons of B. Kliban, who I’m certain must have been influenced by Gorey, (as he was by Saul Steinberg), and who, in turn, was a prime influence on the Far Side’s Gary Larsen (along with Gorey, Adams and Gahan Wilson – it all comes around, folks).

Gorey said his fascination with the macabre began at age 5 when he discovered Bram Stoker’s Dracula, was “scared to death” and began to teach himself to draw. Though he worked in Doubleday’s art department for years, his own book ideas were rejected by publisher after publisher until The Unstrung Harp made it to press and began a string of successful titles.

He later did set designs for the Broadway version of Dracula, in which the entire sets were large reproductions of his pen drawings, intricately detailed castle interiors and drawing rooms; and entirely black and white, except.. one object in each set was brilliant blood-red.

You can now buy a fold-out and fold-up toy book version of the sets as Edward Gorey’s Dracula: A Toy Theatre: Die Cut, Scored and Perforated Foldups and Foldouts.

Unfortunately, there doesn’t seem to be a major repository of Gorey’s work on the web, so I’ve gathered some scattered resources below, though most of them are not representative of his best work..

If you haven’t exposed yourself to Gorey’s brain-tweaking and eye delighting books, I might recommend Amphigorey, an inexpensive collection of several of his small books (which was followed by several other collections in similar format). There are, of course, many other titles.

If you live within reach of Southeastern Pennsylvania, you can still catch a terrific show of Gorey’s originals, Elegant Enigmas: The Art of Edward Gorey, at the Brandywine River Museum until May 17, 2009. (Here is a review of the show, and background about Gorey, from the Philadelphia Inquirer.)

The Edward Gorey House, in his former home in Yarmouthport, MA, is open to the public on a regular basis.

Addendum: Michael Connors of Morguefile has written to add this link to reproduction of Gorey’s Gashleycrumb Tinies, his “Alphabet Book” (delightful!).