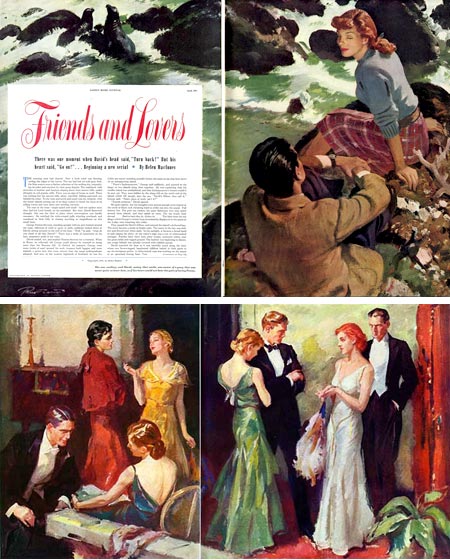 Pruett Carter was an American illustrator active in the first half of the 20th Century.

Carter was noted primarily for his work in women’s magazines, an area of publishing that was particularly fertile ground for illustrators at the time, but also a rapidly changing filed, in which the demands from art directors moved rapidly from one style to another.

Carter, who initially shared an impressionistic approach with his teacher Walter Biggs, was able to move smoothly into new styles as the century progressed. His negotiation of the changing currents of illustration fashion were no doubt helped by his experience within the industry, having been an art director for Good Housekeeping and Atlanta Journal for a number of years.

He also successfully transitioned from painting in oil to painting in gouache, the fast drying nature of which became an advantage in the production of illustrations on a tight deadline.

His other clients included Ladies Home Journal, Woman’s Home Companion, and McCall’s. Carter was also an influential teacher, He taught illustration in New York at the Grand Central School of Art and in Los Angeles at the Chouinard Art Institute.

Carter’s romance themed illustrations always had an element of dramatic tension, a moment waiting to happen, that made them seem as likely to be illustrating a crime story as a romance.