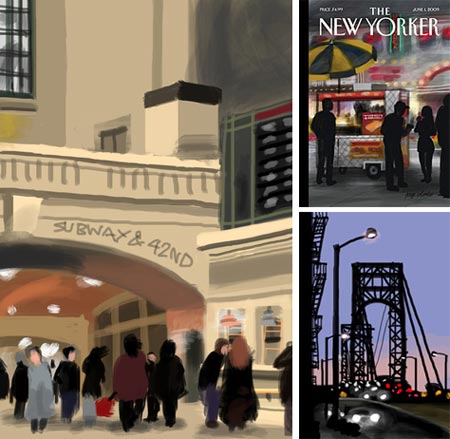 Jorge Colombo is a Portuguese artist living in the U.S. who has been getting much attention lately for this week’s cover of The New Yorker, which he “fingerpainted” on his iPhone using a painting application called “Brushes“.

The app lets you record the painting process and play it back, and the New Yorker article linked above includes a time laps video of his process.

I say “fingerpainted” because unlike other small mobile computing platforms, the iPhone and iPod touch is a touch-screen interface, meant to be used without a stylus, so your finger becomes the “brush”. This seems a little ungainly compared to stylus based small screen painting applicaitons, but the results indicate that you can do some interesting work with it.

Colombo did his sketch in about an hour while standing outside Madame Tussaud’s Wax Museum in Times Square.

On Colombo’s web site you will find some of his iPhone sketches, along with other done in pencil and colored digitally. He is also offering prints of some of the iPhone work.

In addition, there is a section of video and press coverage of his New Yorker iPhone sketch cover.