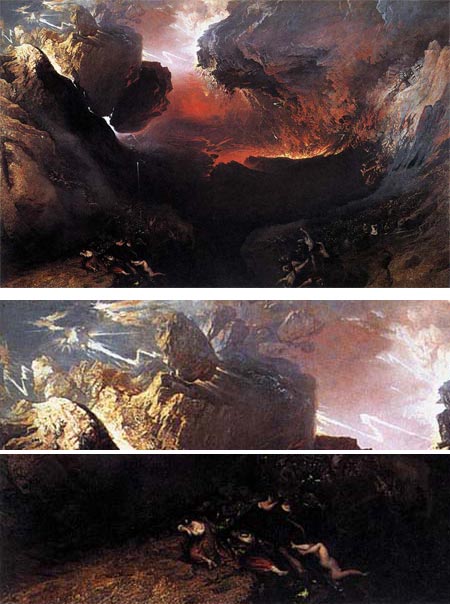 I occasionally make the assertion, in my posts about artists like Jan van Eyck, Antonello da Messina, Albrecht Altdorfer and Matthias Grünewald, that prior to the modern era of motion pictures, artists at various times were the special effects wizards of their day — dazzling those who viewed their works with displays of technical virtuosity, monumental scale and dramatic scenes of exotic landscapes, catastrophic events, and vivid imaginings.

A stellar case in point is John Martin, a romantic painter active in the first half of the 19th Century, who was unabashed in his efforts to wow audiences with his large scale paintings of Biblical and literary events.

His paintings were in a way more artistic versions of “dioramas” or “panoramas”, staged at the time as popular entertainments, that utilized images painted on large cloths, theatrical lighting and sometimes props like potted plants, to amuse the public in a way that presaged movies. The diorama makers, in turn, copied Martin’s work, knowing a good thing to steal when they saw it.

Martin’s paintings are said to have been a significant influence on pioneering movie director D. W. Griffith, who sought to impress audiences with his moving scenes of great drama and catastrophe.

In the latter years of his career, Martin was working on a large scale triptych of Biblical scenes, The Last Judgement, The Great Day of His Wrath (image above, with details, large version here) and The Plains of Heaven.