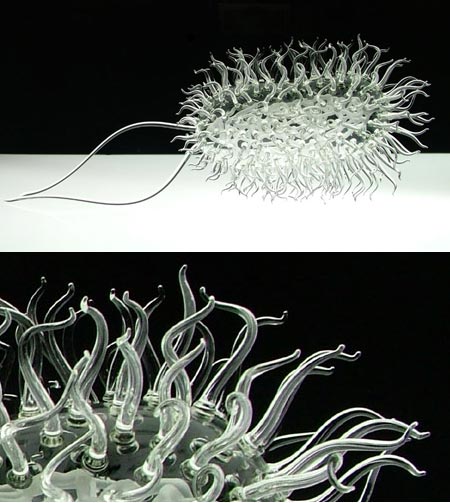 Luke Jerram is a UK artist who creates sculptures, installations and art events.

In his Glass Microbiology project he has created a series of glass sculptures of viral structures, to, in his words, “contemplate the global impact of each disease and to consider how the doctoring of scientific imagery affects our visualisation of phenomena”.

The sculptures are of viruses that are associated with particularly virulent and well known diseases, Smallpox, HIV, SARS, Swine Flu and, in the case of the image above (with detail below), E. coli.

The fact that the virus sculptures are made of glass, a transparent substance which, in its most basic form, has no color of its own, is indicative of the second aspect of Jerram’s investigation, the suggestion that the coloring of scientific images carries implications beyond conveying information.

It’s common for scientific images to be given false colors for the purpose of clarity, or easy perception of information that may be hard to glean in the images’ “true” state. An example of this might be the application of false colors to astronomical images to display the structure of nebulae or the light from infrared or radio sources.

It is also common to color images of viruses; in fact a majority of illustrations and images of viruses that are not the original electron micrographs seem to be intensely colored. Jerram speculates that as a result, most non-scientists might assume that real viruses are actually brightly colored.

He further speculates that the practice can promote a sense of wonder and and make the images more impressive (possibly intentionally), as well as carrying an emotional tone, perhaps one of menace.

The glass sculptures neatly obviate the effect of color (except for one that was deliberately colored by a photographer, though it acts as a contrast), and reduce the viral shapes to just that: their shapes.

Jerram has another interest in removing the effects of color and judging the effect on perception; he himself is colorblind (an awkward term that might more accurately be called limited spectrum color vision), though I don’t know in what range his limitation extends.

The play of light on these sculptures, however, is still beautiful, and the perception of the shapes is heightened by the refractive characteristics of glass (something I respond to as strongly visually appealing); so I have to submit that Jerram has removed one source of intentional visual appeal only to substitute another.

However, as sculptures they work wonderfully. The shapes of viruses are particularly fascinating forms. I also find it compelling that microscopic structures capable of being deadly on a devastating scale can be represented with such beauty.

Jerram’s glass sculptures will be highlighted in a solo show at Smithfield Gallery, London from 22 September to 3 October, 2009.