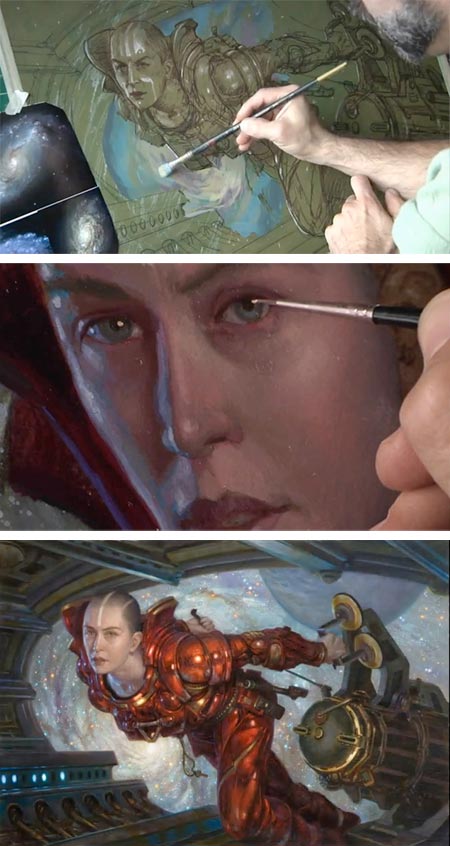 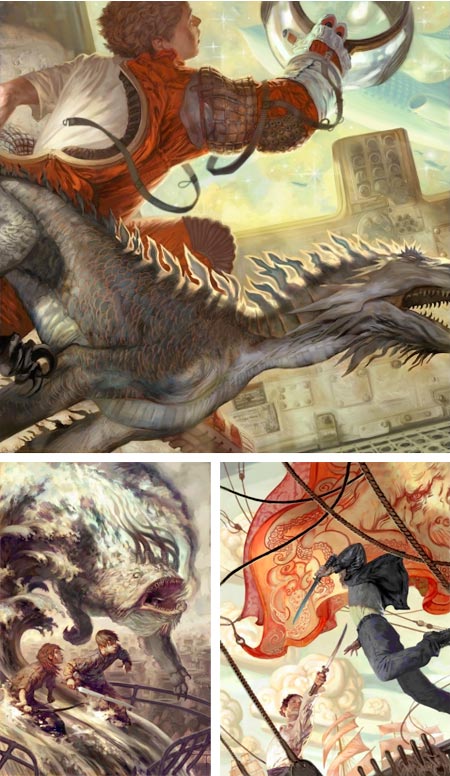 Jon Foster, who I wrote about previously here and here, has a new web site.

It is simultaneously wonderful and frustrating. It’s wonderful, of course, because it features even more of Foster’s elegant, painterly, and superbly accomplished illustrations, old and new; and now includes a terrific section of sketches.

It’s frustrating because it simply doesn’t do justice to how good his paintings are. Size and resolution, as they often are in web galleries, are the limitation here. You can certainly get a taste by browsing through the site, but I have to emphasize that it’s worth seeking out his work in print, as I pointed out before.

Unfortunately, both collections of his work are out of print and commanding high prices used, but if you have copies of the Spectrum collections of fantastic art, you may find some Foster treasures in them (I don’t have a list of the particular volumes).

There is a gallery on the Tor.com site that is much more limited than Foster’s site, but has slightly larger images. There is an audio interview with Foster on Sidebar, part 1 and part 2.

[Via The Art Department] 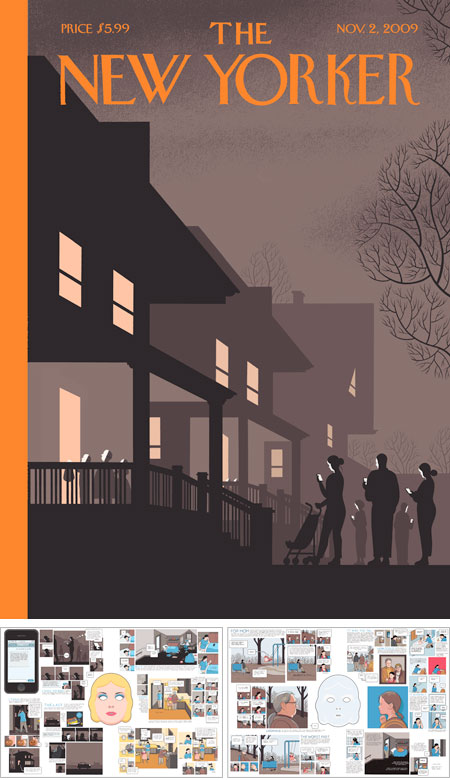 In a fashion Chris Ware fans have come to expect, the hilarious but subtle cover leads seamlessly into the story, a poignant look at generational and family relations, told in his sublime graphic style.

Ware constructs comics in the way a fine woodworker might construct an inlaid box, crafting each element with refined precision, interlocking elements that might seem unrelated to form a unified whole. Notice the parallels between panels in the second two-page spread, the interweaving of the panel designs with the exterior and interior of the masks and the repeated theme of the phone, carried forward form the cover. Also take note of Ware’s superb control of color and his interesting abandonment of perspective for isometric projection in many panels.

Also note that Ware manages to tell a complete short story in four pages, something many contemporary comics writers can’t seem to do in 6 or more 24-page issues. 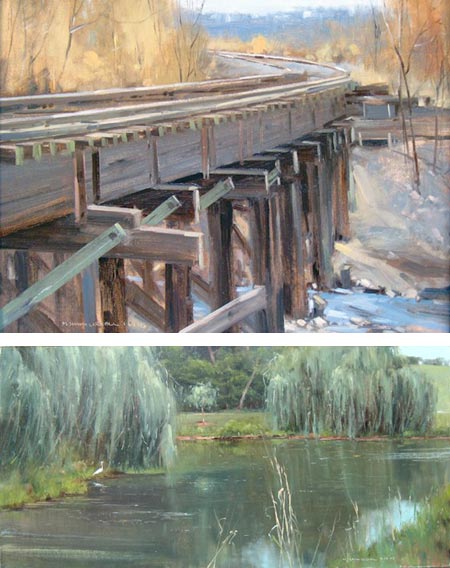 Inexplicably, it requires that you drill down into Paintings, and then choose a sub-section (summer, spring, etc.) before seeing a color image.

Cornell’s paintings, when you do get to them, are rewardingly fresh and lively, with accomplished but abbreviated notation of the subjects, nicely embodying the strengths of the plein air approach.

Cornell’s palette is controlled and understated, to the extent that the bright colors of autumn can be represented in muted tones, lending the images a feeling of quiet refinement. Most are fairly large by contemporary plein air standards, and it’s a little disappointing that there are no larger or detail images provided on the site.

Cornell is also a potter, and apparently represents himself and sells his work through art events rather than gallery representation. He also conducts workshops, sometimes in the company of his father, David M.Cornell, who is also a plein air painter.

A is for Atom is a 1952 (released in 1953) educational cartoon explaining the wonders and mysteries of atomic power, sponsored by General Electric and directed by Carl Urbano (who later went on to work for Hanna & Barbara).

Like the more well known and widely distributed Our Friend the Atom, a longer, part live action, part animated, 1957 film from Disney, this was basically an indoctrination for school children as to why atomic power was a Good Idea. As part of an overall campaign to promote acceptance of that idea, they were quite successful.

Both films, Disney’s explicitly, this film implicitly, treat atomic power as an obedient genie, ready to grant our wishes for nuclear powered cruise ships and airplanes, saving lives with isotope based medicine, and, of course, providing the clean, efficient and oh-so-advanced Energy of the Future to power our cities.

In the course of their ad for atomic power, the two films actually manage to teach some basic principles of atomic physics.

A is for Atom in particular is charming and efficient in this. I especially like portrayal of “Element Town” (about 5 minutes in) and the wonderful building representing “Science”.

Though A is for Atom opens with a (somewhat mild) representation of a mushroom cloud; as you might expect, it conveniently dismisses with a few nods to “shadow of the atom bomb” and “men of good will” the fact that hundreds of thousands had died in the atomic bomb attacks on Hiroshima and Nagasaki only 7 years earlier. (For a sobering counterpoint, see my post on Barefoot Gen.)

This was the dawn of the “Atomic Age”, a time of postwar prosperity with the promise of atomic power balanced against the cold war insanity in which school children were drilled to cower under their desks or line up in the halls with their hands over their heads, and enterprising, forward-thinking families were building backyard bomb shelters. (Ah! The shining promise of the future!)

Films like A is for Atom illustrate again the power that cartoons and animation have to explain and educate (and influence), with the strong appeal of moving drawings.

I’m convinced there was more before the beginning scene, which seems abrupt and more like the end of a sentence than an opening statement, but I haven’t found anything to indicate that is the case.

Jean Fouquet was a painter of portraits and landscapes, even though, as a painter of the early Renaissance in 15th century France, he was largely limited to painting those things in the context of religious art (see my post on Giovanni Bellini).

Fouquet was the court painter to Louis XI, and is usually regarded as the most important French painter of his period. He traveled to Italy, where he caused a stir by painting a portrait of Pope Eugenius IV on canvas rather than wood; and brought the influence of Italian art into his own style, combining it with the influences from Jan and Hubert van Eyck, whose styles dominated northern European painting at the time (see my post on Jan van Eyck).

Fouquet painted at least one free-standing portrait, a self portrait on a copper medallion, now in the Louvre, that is the earliest known portrait miniature; and is in contention for the earliest formal self-portrait in Western art, depending on whether Jan van Eyck’s Portrait of a Man is actually a self-portrait (which it likely is).

It is as a miniaturist that I find Fouquet at his most interesting. He produced astonishing “illuminations”, miniature paintings on pages of manuscript, that have an uncanny monumentality and presence, and a surprising feeling of painting styles more common many years after his time. He was particularly known for his miniatures form the Book of Hours by Étienne Chevalier.

The image at top, above (larger version here, click for enlargement and click “100%’ if image doesn’t show), is a manuscript illumination from a history of Julius Ceasar, and portrays his crossing of the Rubicon. The naturalistic feeling and attention lavished on the background convinces me that, were he born a few centuries later, Fouquet might have dedicated himself to landscape. (It’s interesting, though, as accomplished as he is, to see Fouquet apparently struggle a bit with perspective, particularly if you assume the trees to be the same height. Perhaps the confines of the illuminated manuscript made laying out geometric perspective difficult.)

The other image, Virgin and Child Surrounded by Angels, is the right half of a now separated diptych. It caused a stir in later years (and perhaps at the time) for its sensual overtones, and portrayal of the Madonna in fancy and stylish fashions of the time. (Hey Renaissance fair re-enactors, are the noblewomen among you shaving your forehead and temples as part of your period dress?) It has also been suggested that the model for Mary was Agnés Sorel, a famously beautiful woman of the time, further cause for moral outrage. The Madonna is accompanied by some bizarre cherubs, starkly blue and red, except for their glassy eyes, arranged in a pattern reminiscent of one of M.C. Escher’s surface tessellations.

The Bibliothéque nationale de France (the National Library of France, roughly analogous to the Library of Congress for the U.S.) has mounted a virtual exhibition of Fouquet’s work, particularly his manuscript illumination miniatures, titled Fouquet, painter and illuminator of the XVth century, that gives a good introduction, though the images are somewhat small. You can supplement it with some of the other resources I’ve listed below, particularly the Web Gallery of Art.