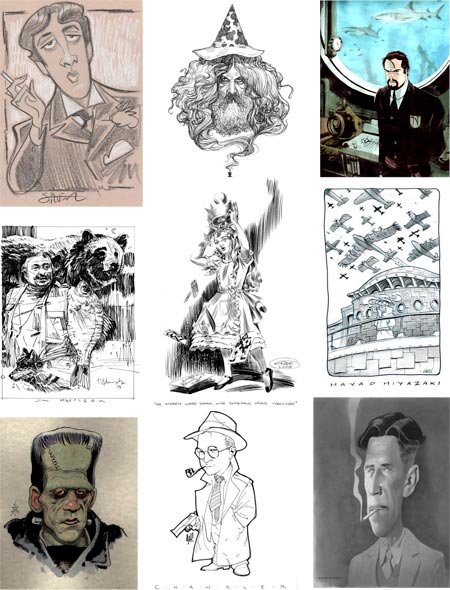 It’s a common practice among contemporary comics artists to do commissioned sketches or even fully realized drawings for fans and collectors.

Often collectors will commission drawings by a number of artists on a single theme, and create over time a collection of themed works by an extensive and diverse list of creators.

Such is the case with the collection displayed on a site titled Hey Oscar Wilde! It’s Clobberin’ Time!, by a collector whose name I don’t know (email address suggests “sgettis”, presumably S. Gettis).

The collection is centered on the theme of asking each artist to portray a favorite literary figure, author or character. This collection has been in progress since 1998, and has been displayed on the web in several forms. I wrote about it in one of its previous incarnations back in 2005 as Artistic interpretations of Literary Figures.

Since then the collection has continued to grow and now includes an impressive list of artists and a fascinatingly diverse list of literary figures. You can browse the collection by either from lists in the right sidebar.

The collection includes a number of comics artists and illustrators I’ve featured previously on Lines and Colors. In the list below, the first link is to the original drawing on the Hey Oscar Wilde! site, second is to my post about the artist.

Addendum: the collector’s name is Steven Gettis. [Thanks to Dennis van Zwieten for the tip.]