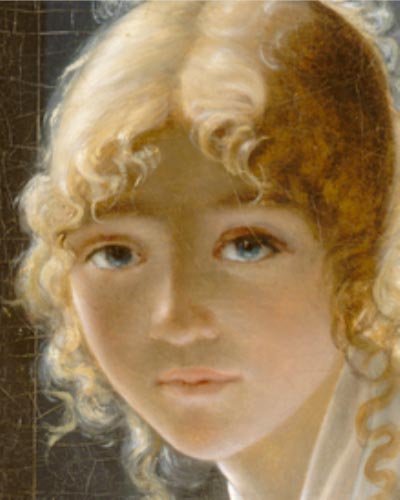 A question from a reader prompted me to revisit my 2006 post on Marie-Denise Villers, a talented but little known French portrait painter whose “one-hit-wonder” claim to fame was that her painting, now called Young Woman Drawing (detail, above), was for some time attributed to Neo-classical master Jaques-Louis David (also here).

The painting, which I believe is a self-portrait, shows a beautiful and intensely focused young woman staring directly at the viewer and drawing in a portfolio sheaf in her lap. Through an enigmatically cracked window pane behind her, what may be a pair of lovers confers on a railed walkway atop a wall. The painting is beautiful and striking when you see it in person, and it seemed unfortunate that there was little information on the artist or her other works at the time I was writing.

As the art resources on the Web are constantly being added to, I went looking to see if more information on Villers had cropped up in the three years since my post. The bad news is that there isn’t much more available on her. Apparently there just isn’t much information about her in general; though I did manage to find some links that I’ve added to the original post and listed below.

The good news is that the Metropolitan Museum of Art, which has the painting in its collection, has added a larger, more color-accurate image to their listing, as well as a zoomable version of the image, which makes is possible to see the painting in more detail if you can’t make it to the Met to see it in person. I’ve used it to show the detail image above; for a view of the entire painting, and more of my comments on it, see my previous post on Marie-Denise Villers.

The Met has also added the painting to their Heilbrunn Timeline of Art History and makes mention of Villers and her sister, Marie-Victoire Lemoine, who was also a painter, in their related article on Eighteenth-Century Women Painters in France.

I also found a few other tidbits, including a painting in a past auction from Sotheby’s, A Young Woman Seated by a Window, which also has a zoomable image; though this work seems less accomplished than the piece in the Met. (I don’t know how long this auction image will remain available.)