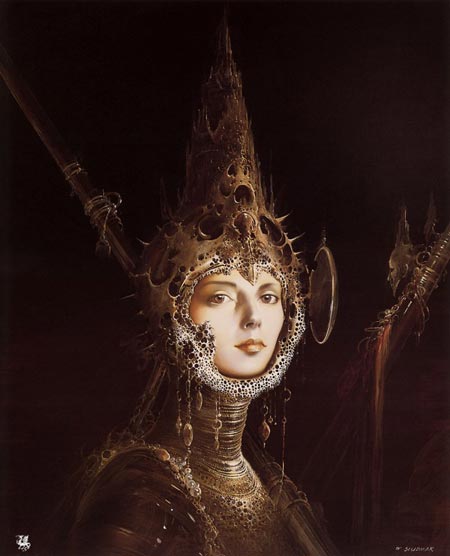 Wojtek Siudmak is contemporary Polish born artist who studied at the College of Plastic Arts and Adacemy of Fine Arts in Warsaw, and the École des Beaux-Arts in Paris. He now resides in France.

Siudmak is a leading proponent of fantastic realism (sometimes called “magic realism”), a branch of fantastic art with one foot in classicism and the other in Surrealism. You can see both in his paintings, classical draftsmanship and technique in the service of free-wheelingly imaginative imagery. At times Daliesque, at others leaning toward Renaissance themes, Siudmak’s subjects swirl, morph, appear, disappear and fade from one image to another, occasionally revealing glimpses of hidden worlds.

Siudmak was associated with a group of artists, writers and filmmakers in Paris who resisted the currents of Modernism in the late 20th Century and became associated with the fantasy and science fiction illustration community. Siudmak’s paintings have been used for the covers of science fiction books, and he has actively illustrated others, including the Polish version of Frank Herbert’s Dune.

He has a web site with a gallery of both drawings and paintings, though I found the “pop up and close” routine a bit tiring. You may find it easier to browse his paintings on other sites like The Funny Web (2 pages) and Museum Syndicate (3 pages), but come back to Siudmak’s own site to go through his drawings, which are poorly represented elsewhere.