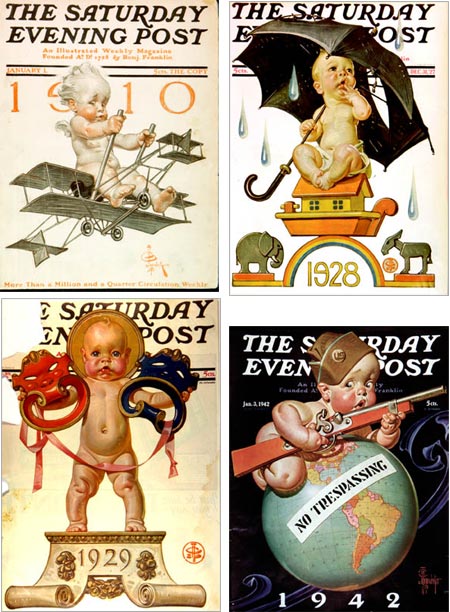 In what is becoming something of a tradition, I’ll wrap up the year with four more Saturday Evening Post covers from the early 20th Century featuring New Year’s babies from J.C. Leyendecker, the illustrator who started the practice of representing the new year as a baby.

For more on the history of Leyendecker’s New Year’s babies, see my post Happy Leyendecker Baby New Year from 2006. I’ve also listed below some of my previous posts about this amazing illustrator, one of the all time greats, who should be much better known than he is today.

The good news is that after many years without an in-print book of Leyendecker’s work, J.C. Leyendecker by Laurence S. Cutler and Judy Goffman Cutler was published last year and is still available.

I hope you all have a new year filled with great art, old and new! 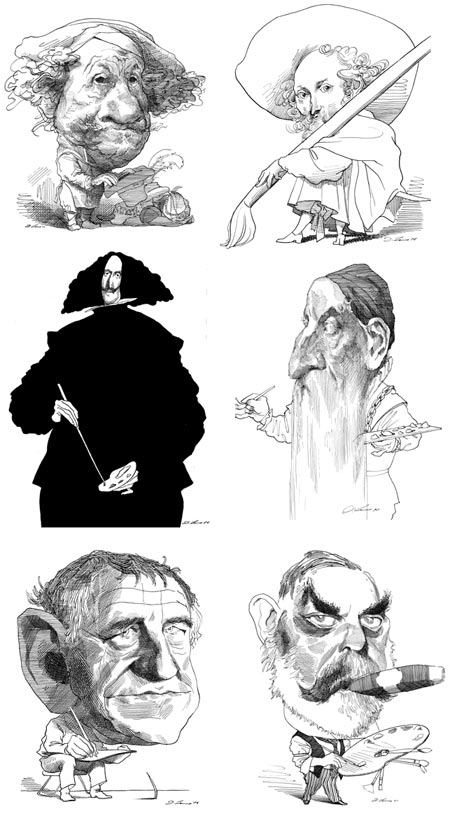 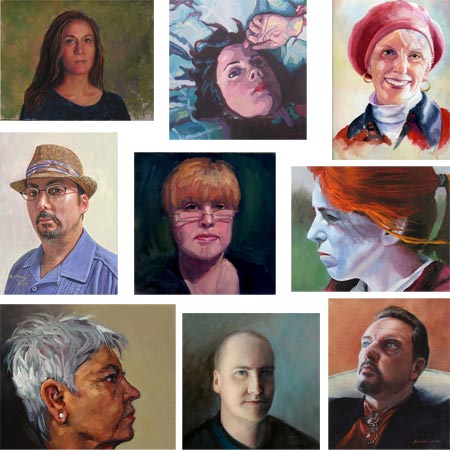 I’ve written before about Karin Jurick, both about her own wonderful paintings and her ongoing group painting blog, Different Strokes From Different Folks in which numerous artists paint their own interpretation of the same photographic resource in periodic challenges.

Jurick has decided to repeat the challenge again this year, (in what may become a tradition), with a Different Strokes From Different Folks Year End Portrait Swap.

This time there are 180 participating artists. The photographs have all been assigned, but the artists still have until December 31st to submit their finished portrait.

A good number of them are already posted on the Different Strokes blog, however, and it’s a fascinating mix of painting styles and approaches. The images usually have a somewhat larger version linked to them, as well as a link on the artist’s name to their own site of blog.

The participants include Adebanji Alade, who I recently profiled and Karen Hollingsworth, who I profiled in 2006.

Jurick has also posted a pair of videos on YouTube, here and here, in which some of the portrait paintings are shown with the source photograph. 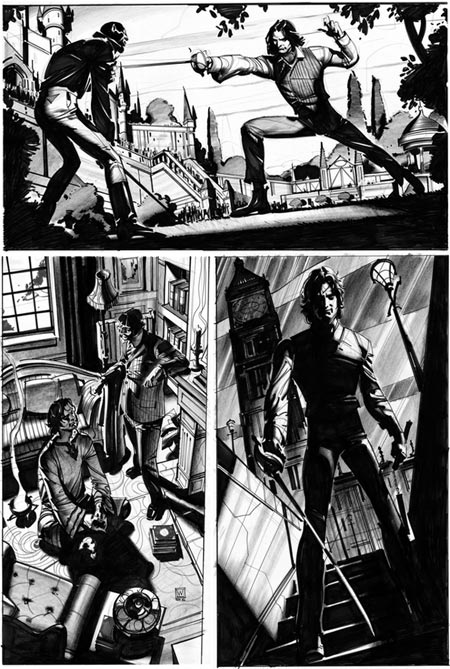 Ordinarily, concept art for film is created as a means of visualizing scenes before they are staged and filmed; giving directors, designers and production companies a guide as they develop the components necessary to actually bring the scene to to the screen.

However, according to Borys Kit of The Hollywood Reporter, this is a case of specialized concept art being utilized at a much earlier stage — to sell the film idea to the studio.

Producer Lionel Wigram had the idea for the action hero take on the Sherlock Holmes tradition, but felt that a written story treatment wasn’t sufficient to get the idea across to the studio executives.

He contacted Gregory Noveck at DC Comics and asked for a recommendation for an artist who could help him convey the idea visually. Noveck suggested John Watkiss, an artist with experience in both comics and movie concept art (see my previous post on John Watkiss).

Working together they created a comic book like pamphlet with illustrations that got across a visual and dramatic punch that sold the movie to the studio. (The comic-like format led to rumors for a while that a Watkiss-illustrated Sherlock Holmes graphic novel was in the offing, but unfortunately that was not the case.)

Watkiss used dramatically staged ink and tone drawings, heavy with chiaroscuro, to convey both the mood and action intended in the production.

The drawings themselves are an unusual style for concept art, but work beautifully for the purpose (and would have made for a terrific graphic story).

Many of the original illustrations are currently on display, and for sale, at Gallery Nucleus in Alhambra, CA, in an exhibit called The Art of the Motion Picture: “Sherlock Holmes” by Jon Watkiss, that runs until January 18 2010.

If you haven’t seen the movie, you might consider some of the images plot spoilers. 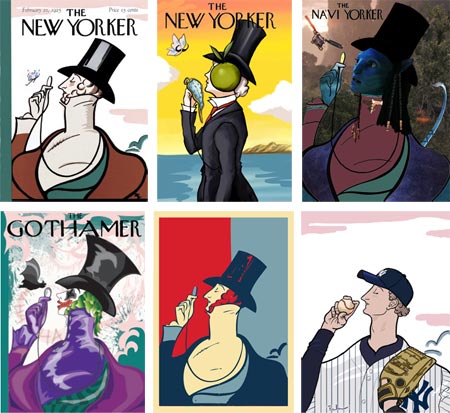 This beautiful drawing in pen and brown ink, wash and brown, black and white chalks, Adoration of the Shepherds, by François Boucher, is currently on display at the Morgan Library and Museum in new York.

It is part of an exhibit called Rococo and Revolution: Eighteenth-Century French Drawings, that runs until January 3, 2010.

There is a selection of drawings from the show highlighted on the Morgan’s web site, which are linked to zoomable versions. Though I’m not always a fan of the constraints of zooming images, they still offer the ability to see details normally not available in smaller images on the web. This is also something that is rarely applied to drawings.

Zooming in on this drawing we can see Boucher’s fluid Rembrandt-like pen lines. Look at the way he has used the reddish brown tones and judicious applications of white chalk to give the scene a luminous quality more often seen in paintings than drawings.

I love the wonderfully economic notation of the animals and the wooden structures, bales and baskets at the lower right portion of the drawing.