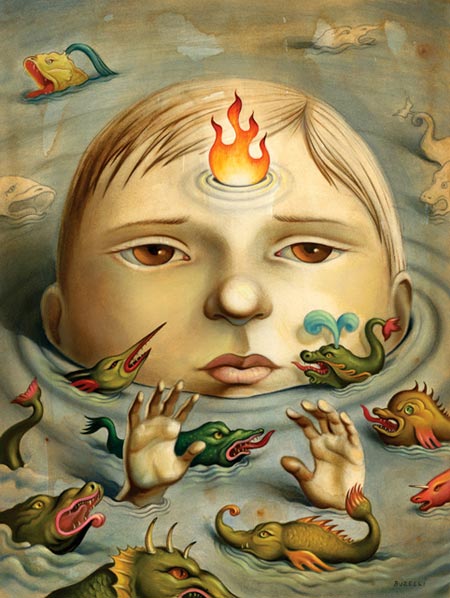 Originally form Chicago, NYC based illustrator and gallery artist Chris Buzelli cites painting alongside his grandfather in his TV repair shop as a child as a major influence on his choice of career.

Buzelli studied at the Rhode Island School of Design, and his illustrations have appeared in publications like Time, Rolling Stone, Playboy and The New York Times.

Often his images deal with wonderfully grotesque animals and other elements of the natural world, though they appear to be illustrating concepts related to modern industrialized life.

Buzelli’s web site has a gallery of his work (note that there are 4 pages of thumbnails, accessed by a small row of dots about the thumbnail area). There is also a Shop, in which both prints and original art are available.

The images on his site are unfortunately a bit small. You will find some larger images on the Tor.com site, and accompanying an interview with the artist on LCS and another on Woosta. There is also an interview with Buzellii on the Communication Arts site.

Buzelli has a blog on Drawger.