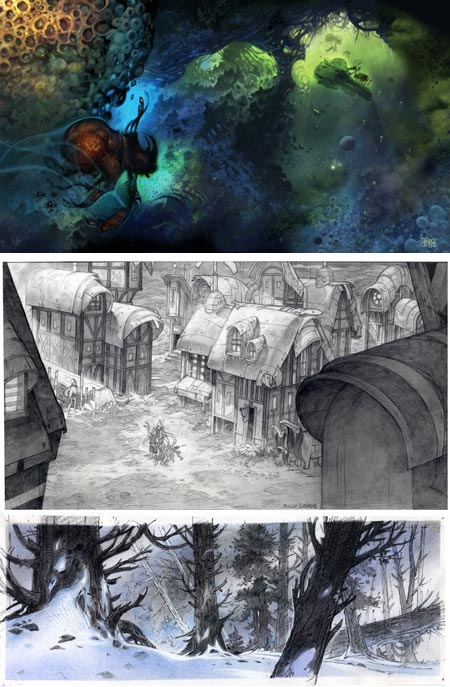 One of the things that appealed to me right away when I browsed through the (still in progress) portfolio site for concept artist and designer Billy George was the nicely otherworldly color schemes he worked with in his environment paintings for Spacetime’s Blackstar game project (image above, top).

He used palettes of seemingly not-of-this-Earth colors, but made them nicely consistent within themselves.

I was then impressed with his subtle and restrained concept art for Disney’s Treasure Planet feature animation (above, middle), and, in particular, his beautiful workbook sketches for Brother bear (above, bottom).

You can find a number of these and more in the galleries on his site (note the sub-navigation at top to other sections, like Layouts, Characters, etc.).

You will find more work on his blog, including comics work, in particular an in progress graphic novel, Ruined Earth, storyboards and other goodies, like experimental vector drawings intended for Flash animation.

George was hired by Disney as a trainee when he graduated from Art Center College of Design. He worked with them for ten years and worked on seven feature animations. He left to pursue work in the gaming industry, but has recently returned to the Disney fold as Lead Concept Artist for the Disney owned Junction Point interactive studio in Austin Texas.