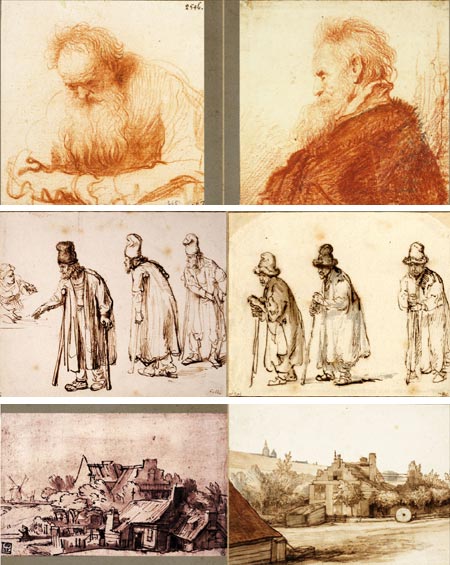 I’ve mentioned before (also here) that the attribution of works to artists from the past is often an inexact science, perhaps more of an art in itself.

The Getty Museum is currently exploring this concept with an exhibit titled Drawings by Rembrandt & His Pupils: Telling the Difference.

In the web site material for the exhibit is an interactive that compares drawings by Rembrandt side by side with similar drawings by his students and contemporaries; many of the latter drawings having once been attributed to Rembrandt.

The Wall Street Journal has an article about the exhibit that also has an interactive. In this case they present the compared sets of drawings without initially identifying the artist, letting you play detective in determining which is by Rembrandt. (It’s hard to predict if this article may disappear behind a pay-wall at some point.)

The interactive on the Getty’s site allows you to zoom in on the images, affording a detailed view of the drawings.

Drawings by Rembrandt & His Pupils: Telling the Difference runs to February 28th at the Getty Center. There is a concurrent exhibit, Drawing Life: The Dutch Visual Tradition, that should provide a rich context for the Rembrandt show.

There is a book published to accompany the exhibit: Drawings by Rembrandt and His Pupils: Telling the Difference; and there is also a nice book of Rembrandt drawings that came out in 2007: Rembrandt Drawings: 116 Masterpieces in Original Color.

5 Replies to “How to Spot a Rembrandt”