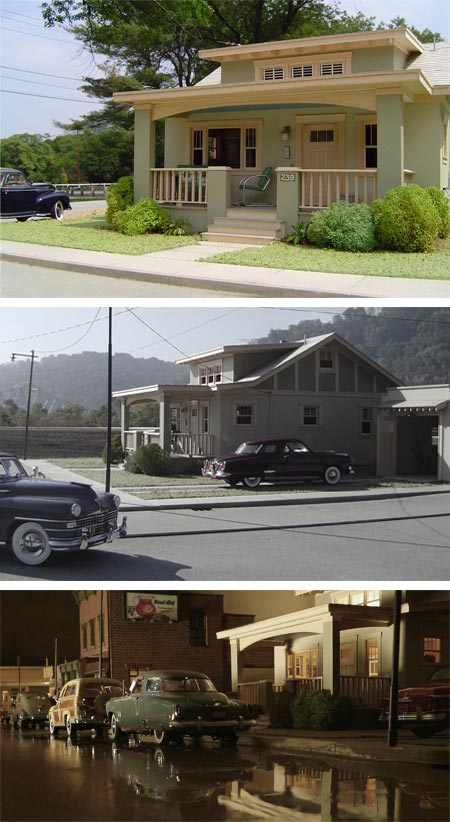 I don’t normally feature photography on Lines and Colors, not that I don’t think of photography as an art form; I just feel that it’s dealt with better on many other sites, and seems different enough to be in a separate category from the art forms I feature.

But the photographs of Michael Paul Smith just charmed my socks off, and there is more to them then excellent photography. In the images you see above, the houses, cars and streets are 1/24th scale (1/2 inch = 1 foot; 1 m = 4.16 cm).

The cars are die-cast models; the buildings are built by Smith, constructed out of Gator board, plastics such as styrene and Sintra, and found objects (and it looks like the old model makers standby of lichen for shrubs).

The outdoor scenes are set up on a table and photographed against real backgrounds. The interior ones, lit very simply but cleverly, are photographed in Smith’s garage.

There is no digital manipulation, no GCI, no Photoshop compositing; it’s all in the models and the original shot from the camera.

My father, among his other skills, was a museum model maker, so this has a particular resonance for me. He, my brother and I spent many happy hours working on train layouts and even helping him construct his museum models; but we never managed photographs of them that had this kind of emotional depth.

Smith says: “What started out as an exercise in model building and photography, ended up as a dream-like reconstruction of the town I grew up in. It’s not an exact recreation, but it does capture the mood of my memories.’ 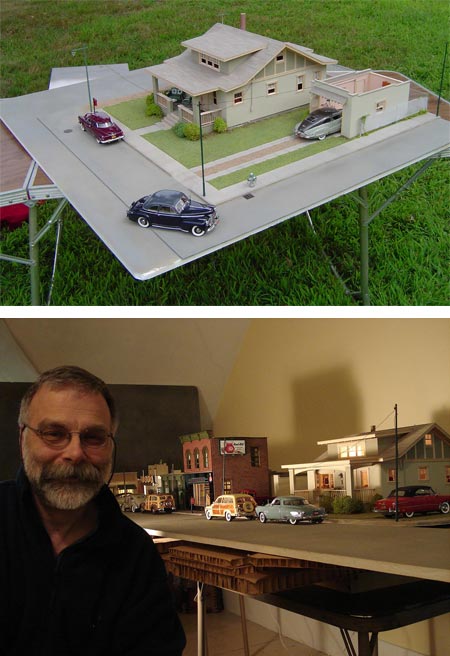 There is a two page Flickr set of his photographs, (and here), many of the compositions have been photographed in both color and black and white, the latter looking uncannily like actual photos from the era Smith is recreating.