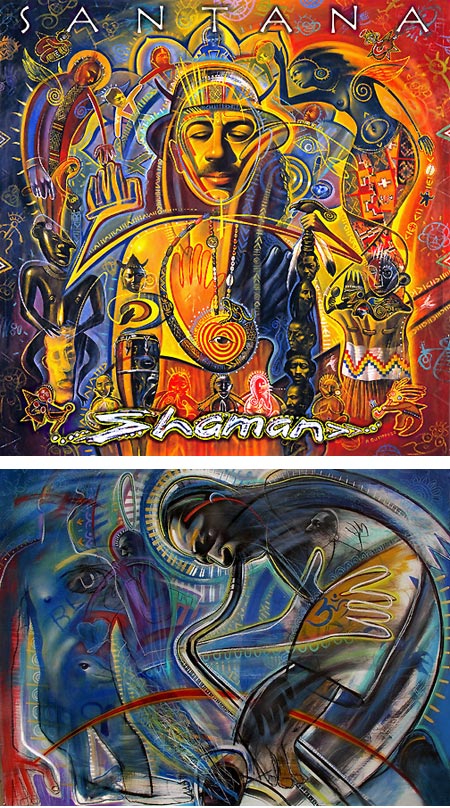 Illustrator Rudy Gutierrez began his professional career while still a student at Pratt Institute. In addition to his freelance career, Gutierrez now teaches illustration and is the Illustration Coordinator at Pratt. He was awarded the Distinguished Educator in the Arts award for 2005 from The Society of Illustrators.

His clients include The New York Times, Rolling Stone, Playboy, HarperCollins, Viking/Penguin and several recording companies, including Verve Records and Arista Records. One of his most widely recognized images is his CD cover for Santana’s 2002 release Shaman.

Gutierrez has had the opportunity to do illustrations of a number of musicians and other well known figures.

His illustration style is a bright burst of orchestrated chaos — swirling patterns, rough marks and scribble-like lines surround and flow in and out of rendered representational images. Faces and figures appear and disappear within the compositions, which are often complex, but never lack focus or definition.

His visual elements show influences of op art, cubism, expressionism, urban grafitti, distorsions from African masks, patterns from other ancient cultures, and the free lines of children’s crayon drawings. Into this mix he stirs realistic rendering, bright colors and a variety of textures.

Gutierrez’ own web site is under construction, and points interested parties to his portfolios on Altpick, Richard Solomon and Pratt Talent. You can also find a gallery of his work on The iSpot.

He occasionally does murals and large scale work, and is part of Richard Solomon’s Art On a Grand Scale slate of illustrators.

One Reply to “Rudy Gutierrez”