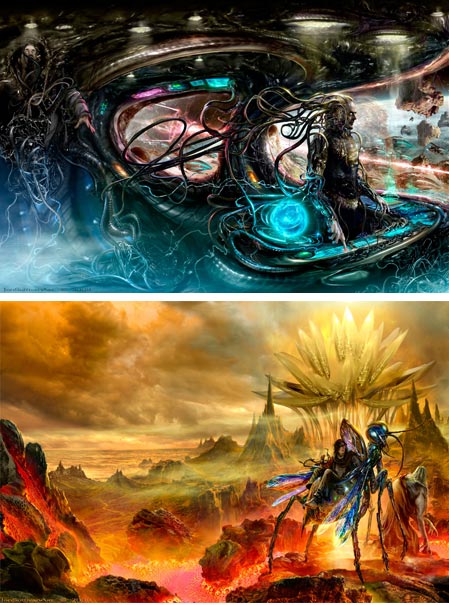 I know little about illustrator Jon Sullivan, except that he has done numerous science fiction and fantasy themed illustrations and covers for companies like TSR and Tor.

His scenes of dragons, aliens, warriors, beasts and the landscapes of strange worlds are ablaze with fiery electric color, brilliant lights, arcs of electricity and the neon glow of futuristic technology.

Sullivan uses lots of contrasting complimentary colors to punch up the intensity of his hues, along with juxtapositions of sharp value contrasts. In some images he also utilizes a limited palette with the attention drawn to limited passages of one or two high chroma colors.

Everything is in the service of drama and the suggestion of epic struggles, which is part fo the great fun in this kind of fantasy illustration.

The galleries on his site are unfortunately a bit awkward to navigate. There are several galleries of thumbnails that can be clicked on for larger images. Some of them reward subsequent clicks with larger images or detail crops, while others return you to the thumbnails, and some of them return you to a different thumbnail page than the one from which you first accessed the image, making it difficult to systematically look through the images.

There is also a Flickr set of his illustrations, and a smaller gallery accompanying an article on io9.