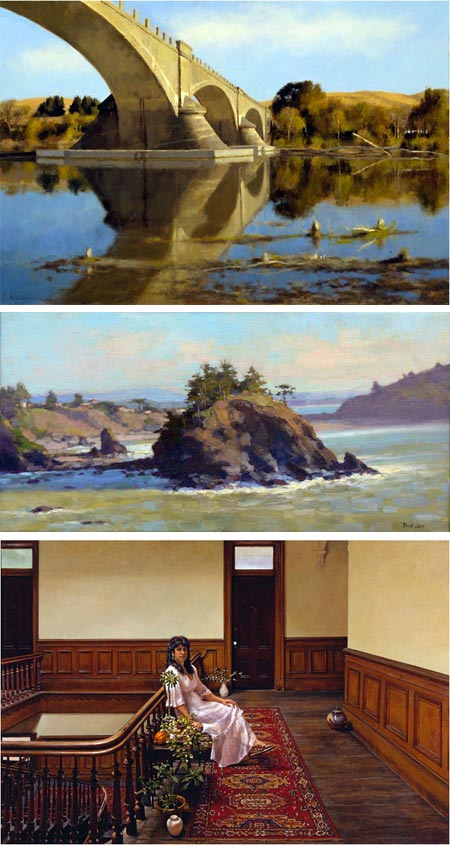 California painter Jim McVicker makes his home in Humbolt County, which is part of the rugged and beautiful Pacific Northwest region of the U.S.

His paintings of that landscape and others carry the feeling of both mid and late 19th Century landscape painters, with a sense of atmospheric immediacy, and a serene, confident command of color and value. Though self trained, McVicker seems steeped in traditional painting methods. (I love the Eakins-like quality of the painting above, top.)

He paints on location, even with large scale works, working to be true to the color and light as nature presents it, and his landscapes have a strong sense of place.

In some of his smaller works (above, middle) you can see a painterly surface quality. I’m at a disadvantage in not having seen his work in person, but my guess is that the apparent refinement of his larger works would reveal itself to be quite painterly close up. Unfortunately, there are no detail crops provided in his online galleries of work.

McVicker also paints still life subjects and interiors, often mixing the two in compositions that include still life arrangements and the room in which they are set. His portraits also often include room interiors, as in the image above, bottom.

Fascinatingly, many of his portraits that include interiors are of artists in their studios.

His web site includes galleries of all three subject groups. They are nicely extensive, though inconvenient in that they don’t offer thumbnails or any way to access individual pieces other than clicking through all of the images in order. One of the sections if devoted to photos of him painting on location, which are instructive in terms of the scale of the work and interesting in some of the dramatic locations in which he paints.

McVicker has a couple of painting videos on YouTube, one of which is the first few minutes of Jim McVicker – a Way of Seeing, a professionally produced 30 minute documentary about the artist that can be viewed in its entirety, or downloaded, on the artist’s site. This one also seems professionally produced, and provides some close up shots of his paintings, as well as showing them in spaces where you can get a feeling for their relative size.

You can also find his work on the web sites of galleries where he is represented.