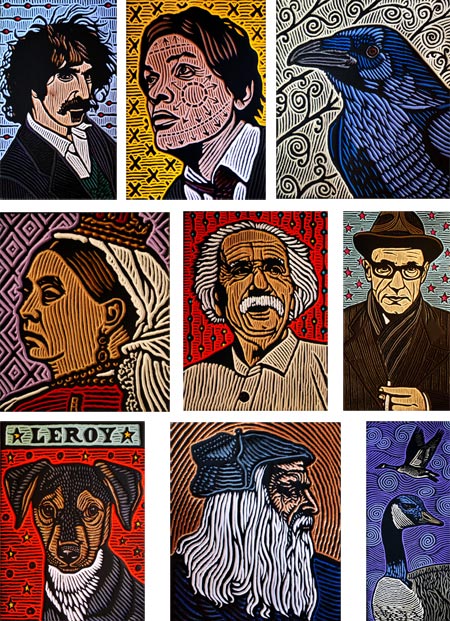 Lisa Brawn is a Canadian artist working in the medium of woodcut. Unusual enough these days, she adds several elements to the process that make it even more unique.

One is her choice of wood. Woodcut a painstaking relief printmaking process in which the “negative” areas, those not to be printed, are carved away leaving the parts to be inked raised as part of the original surface (as opposed to intaglio processes, like etching, in which the lines that receive ink are lower than the surface).

Most artists working in woodcut choose wood with an even grain and smooth surface, commonly beechwood, cherry or walnut. Brawn has worked that way, but she responded to the opportunity a couple of years ago to by five truckloads of salvaged douglas fir beams from dismantled grain elevators and the restoration of the Alberta Block in Calgary, wood that has knots, holes and gouges and is often peppered with rusty nails, wood with a history, as she puts it.

Brawn has matched her quirky choice of materials with a quirky range of subjects, largely portraits of figures from history and pop culture, as well as several series of animal subjects. When searching through her online gallery of woodcuts, which you can do by year or alphabetically by subject, you can have a single page in which the subjects include Da Vinci, Dirty Harry, Dorothy Parker, David Suzuki, David Bowie, Don Cherry, the Dalai Lama, a deer and a duck.

Another aspect of her work that is unusual is the role of the woodblock itself. Usually prints are pulled from the block until it is retired at the end of the decided upon run. While Brawn pulls a small run of monochromatic prints from her blocks, it is the blocks themselves that stand out and are presented as art objects, with the raised areas painted black, as though inked, and the recessed areas painted in bright colors.

The other unusual feature of Brawn’s work is her use of patterns and decorative elements in the backgrounds, and sometimes within the faces, of her subjects.

She follows up on her other eccentricities with a penchant for alternative display spaces and unusual venues for her work, including Surgarmobile, a 1935 silver travel trailer that she used for a time as a mobile gallery.