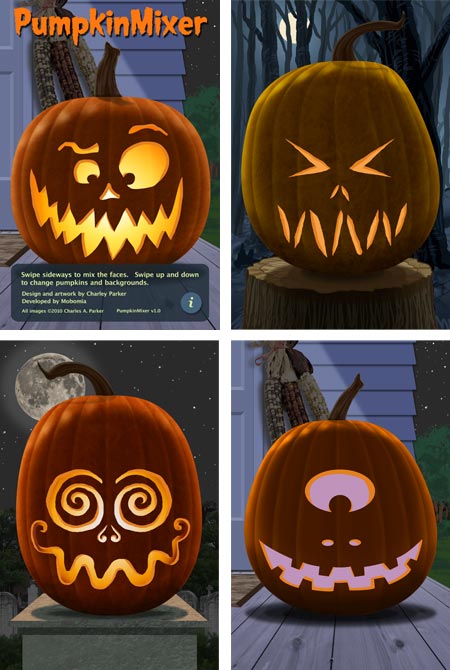 I don’t often talk about my own projects on Lines and Colors, but sometimes they’re enough fun to be worthy of note.

PumpkinMixer is my new app for the iPhone and iPod touch. Like my other apps, DinoMixer and MonsterMixer, it was developed with my friend and colleague Leon Stankowski, who created the coding to fit with my design and illustrations, worked with me on the functionality and coordinated the sound.

Similar to the other “Mixer” apps, PumpkinMixer is based loosely on the old Surrealist game of Exquisite Corpse, in which artists would fold over paper and draw three independent parts of a drawing, head, body and legs, without seeing the outcome until all were in place. This concept made its way into popular culture as a children’s game (my friends and I played it in elementary school), and was eventually adapted in publishing as “mix-n-match” children’s picture books (usually spiral-bound, with stiff cardboard pages that are divided in three).

PumpkinMixer, like DinoMixer and MonsterMixer, is an electronic version of this. In the case of PumpkinMixer, you swipe side to side to swap sets of eyes, noses and mouths, with an extra horizontal band at the top to switch between three backgrounds. Swiping on the iPhone screen vertically switches between pumpkins and swaps out the colors of the animated “candle flame” behind the face cut-outs.

Like many illustration projects, this one, in addition to the design and technical challenges, had a deadline. Since PumpkinMixer just made it through the App Store approval process and became available today, one day before Halloween, you might say we just made it; though we obviously had an earlier release in mind.

On the other hand, you could say we’re just really really early for next Halloween!