The great American illustrator Howard Pyle was influential both in his own work and as a teacher whose ranks of students contained a generation of America’s finest illustrators. Artists like N.C. Wyeth, Frank Schoonover, William James Aylward, Elizabeth Shippen Green, Jessie Wilcox Smith, Violet Oakley, Maxfield Parrish, Ellen Thompson Pyle, Olive Rush, Phillip Goodwin, Stanley Arthurs, Allen Tupper True and many others passed through his classes at the Drexel Institute in Philadelphia and his own school in Wilmington, Delaware.

Of them, Harvey Dunn stood out not only for his masterful paintings, but for his own contributions as a teacher, carrying forward Pyle’s teachings, along with his own learning and strongly held convictions, to a new generation of illustrators, a list that also includes many notable names. After only two years as Pyle’s student, Dunn opened his own studio in Wilmington and began to take on illustration students.

Dunn created vibrant, energetic canvases that sing with drama, emotion, adventure and excitement. Even though many of his paintings were printed as black and white illustrations, he painted them in strikingly rich color, perhaps partly to please himself and partly to honor the extremely high standards of his mentor.

His illustrations appeared in The Saturday Evening Post, Collier’s Weekly, Harper’s Magazine and Scribner’s as well as in numerous books. He emphasized the emotion and feeling of the image, taking Pyle’s advice to project oneself into the scene being painted, and he became a master of dramatic composition.

Dunn is particularly renowned for his portrayals of the pioneer west and of the prairie, as exemplified by the area in South Dakota where he was born. His ouevre, however, was much broader than that. In World War I Dunn volunteered as one of the first to be an official war artist (see my posts on Art of War and They Drew Fire), traveling with a fighting unit and sending his pictures of the battlefield back to the U.S., bringing the war home in personal and emotionally powerful manner.

On his return from the war, Dunn found himself unenthused about returning to editorial illustration, but his plans to continue expanding his wartime sketches into fully realized canvasses were dashed by a lack of interest from the war office, and a public apparently eager to put the war behind them.

He began a series of more personal works, some of them among his best known, of the prairie and prairie life, including The Prairie is My Garden (above, top) and a series of beautiful nudes.

Dunn continued his commercial work, but eventually moved to New Jersey, just outside of New York, where he opened a school of illustration with Charles Chapman and also began teaching in Manhattan at the Grand Central School of Art.

Like N.C. Wyeth, Dunn was a restless experimenter, always working with the application of paint and color, observing and absorbing influences from many quarters, including, to my eye, French Impressionism, German Expressionism and even Fauvism. His work can be a dramatic amalgam of the traditional and the modern.

Dunn’s work and contribution to American painting are greatly undervalued, and even in these days of increasing appreciation for classic illustration he doesn’t get the recognition he deserves. 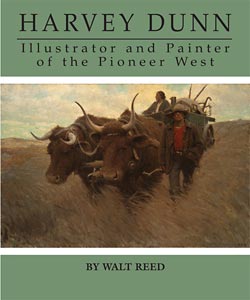 Fortunately, a new book may help remedy that, Flesk Publications has just released a wonderful new book of Dunn’s work, Harvey Dunn: Illustrator and Painter of the Pioneer West, compiled, researched and written by Walt Reed.

Reed, for those unfamiliar with the name, is a well known author of several books on artists and illustration, the founder of Illustration House, the foremost art gallery devoted to illustration in America, and a lifelong devotee of the work and methods of Harvey Dunn. Though he couldn’t study with Dunn directly, Reed, an artist himself and faculty member of the Famous Artist Schools, studied with Dunn’s student Harold Von Schmidt.

I had known this book was in production, but I have to say that when I received a review copy from Flesk I was stunned. First of all, the book is absolutely beautiful. Flesk may have even raised the bar on their own high standards of art book production.

What really took me by surprise, however, was the depth and extent of the book. With almost 300 color plates and more than 70 additional black white illustrations, the book is a sweeping account of Dunn’s career and prolific output. The pages just pop with his intense color, dramatically three dimensional application of textural paint and striking compositions.

It displays a deep appreciation of Dunn’s approach and artistic concerns, follows his development and displays his range with exceptional reproductions, wonderfully selected and arranged.

Though the majority of the book is a monograph on Dunn and his work, there is a second aspect of the title that I didn’t expect, a look at Dunn as a teacher, including a section on his working methods, and an overview of some of his notable students, which included Harold Von Schmidt, Arthur D. Fuller, Charles Andres, Saul Tepper, James Edward Allen and the incredibly accomplished Dean Cornwell and Mead Schaeffer.

There is also a remarkable treasure in the form of an almost-facsimile reproduction of An Evening in the Classroom, a compendium of notes from Dunn’s students (who revered him) of his comments, criticisms and advice given in the course of his classes.

Reed says in his introduction that, though he was unable to study with Dunn directly, he has become a student of Dunn after the fact in assembling this book. In doing so, he has allowed us to share in that privilege.

The volume goes on to include a bibliography, a listing of Dunn’s work in museum collections, and a record of Dunn’s published work.

The book is available from Flesk Publications as both a trade hardcover for $50 and a deluxe slipcased limited edition with additional features for $125. There is a preview of some of the pages on the page for the book, but it just doesn’t do the book, or Dunn’s striking work, justice. This is unfortunate, because the book isn’t being distributed to mass market stores, so you can’t pick it up and look at it, and those not already familiar with Dunn may miss out.

The price, however, is the other thing that amazed me. An art book this extensive, authoritative and strikingly beautiful (even as a coffee table art book) in the hands of most other art book publishers would be priced over $75 or $100. I don’t know how Flesk has kept it to $50, perhaps a labor of love on their part as well, but I’m glad they did. Anyone with an appreciation for the Brandywine School, or American illustration, or for that matter, painting in general, will find it a treasure, and Dunn’s work deserves to be much more broadly known.

This is obviously more than a book on Harvey Dunn, this is a labor of love by Walt Reed, a beautiful tribute to a great American artist and a stunning volume that, if not a catalogue raisonné, is without question the definitive book on the artist and his work.