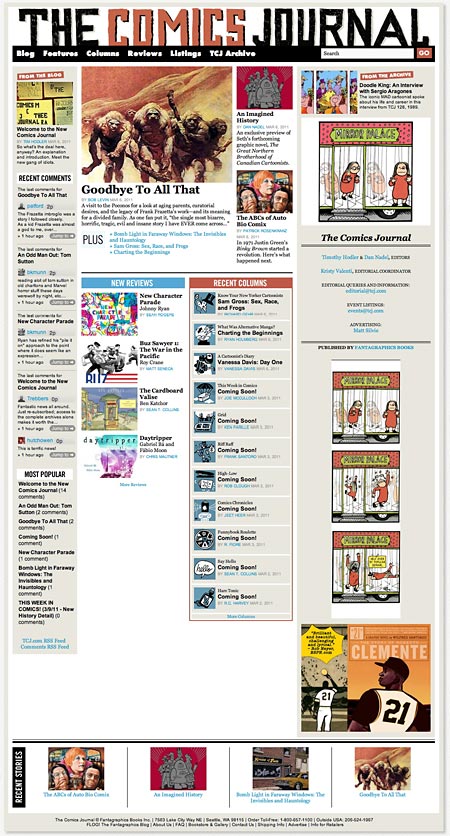 The Comics Journal is a venerable (30 year) print publication that aimed to bring highbrow criticism and commentary to the oft maligned field of comics.

In the process it has been alternately unbearably stuffy and highbrow, and wonderfully informative and in-depth, often featuring book-length interviews with comics creators. I’ll take the good with the bad and say that it has overall been a welcome addition to the limited world of comics journalism, even as the mainstream media and web journalism have taken up the slack in recent years and expanded the range of writing about comics as an industry and an art form.

The Comics Journal’s own website, unfortunately, has been less than stellar. Despite some excellent blog writing and other occasional standouts, the overall presence has been weak and not well focused.

That looks to be changing, as new editors Dan Nadel and Tim Hoder, editors of the Comics Comics site, have launched a new, redesigned version of the TCJ site, with declared intentions that sound like the site can become a new destination site for those interested in comics on many levels (including highbrow). The first change of note is a new, much better and more usable interface.

The new editors promise that in addition to new material, both short posts and in depth material, the archives from the print magazine will continue to be added to the site, with the remainder of the past issues online by the end of 2011.