In a letter to his brother Theo in 1882, Vincent van Gogh wrote:

“Do you know an American periodical called Harper’s Monthly Magazine? – there are marvellous sketches in it. I don’t know it very well, I’ve only seen six months of it and have only 3 issues myself, but there are things in it I find astounding. Among them a glass-blower’s and an iron foundry, all kinds of scenes of factory work. As well as sketches of a Quaker town in the old days by Howard Pyle.”

Van Gogh also referenced Pyle in a number of other letters to his brother and to Anthon van Rappard. He is known to have clipped and collected reproductions of Pyle’s illustrations from the magazines.

Often rightly called the “father of American Illustration” (though F.O.C. Darley may have claim to part of that title simply from his position in time), Pyle was one of the most brilliant, important and influential illustrators in the history of that medium of artistic expression.

The long, intentional denigration of “illustration” as “less than art” by those with a vested interest creating and maintaining that artificial distinction (essentially another way to set the “cultured elite” apart from the “uncultured masses”, i.e another reason the rich give themselves to feel superior to those “below” them), has clouded the appreciation of illustration as art and assessment of those classified as illustrators as artists.

Pyle’s innovations in color, composition, value contrast and emotional drama extended far beyond his impact on the illustrators who studied with him (many of whom are among the greatest names in American illustration, like N.C. Wyeth and Harvey Dunn), and their artistic descendants (e.g. Frank Frazetta and his followers). Not just Van Gogh, but many artists around the world saw Pyle’s drawings and paintings reproduced, had access to them in books and periodicals, and carried his ideas into their own work.

The Delaware Art Museum, which was itself founded on a core collection of Pyle’s work as the Wilmington Fine Arts Society in 1912, a year after the artist’s death in 1911, is marking the centennial of both events with an exhibition of Pyle’s work that extends from November 12th of 2011 to March 4th of 2012.

The exhibition, titled Howard Pyle: American Master Rediscovered, displays the highlights of the museum’s superb collection of Pyle’s works alongside work by other artists who influenced, or were influenced by, the American master. It rightly seeks to put Pyle in context with the larger art world of his time, and the flow of art history, in the course of which he was more than a ripple.

Pyle, working at a time prior to widespread reproduction of photographs and many years before film or television — a time when major illustrators were popular figures akin to modern rock stars or movie actors, was an illustrator’s illustrator, tremendously admired by his peers as well as the story reading public.

Works by Pyle and others illustrators of his day shaped the visions of popular culture, much as movies and television were to do in the latter part of the 20th Century. Illustrated stories in books and periodicals were the distributed popular culture of the day in the late 1800’s, and many of Pyle’s visual inventions from the time carry over into modern day popular culture. 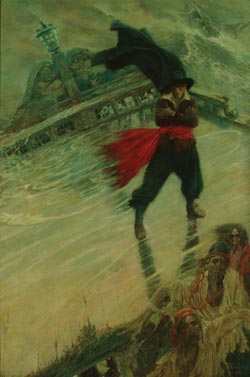 Our modern picture of colorful pirates, as portrayed by everyone from Erroll Flynn to Johnny Depp, was a concept essentially made up out of whole cloth by Pyle. He realized that realistic pirates, who wouldn’t have looked much different than other hard working seamen of the time, were much better portrayed for stories as idiosyncratic characters, with colorful sashes and bandannas, decorative swords and sheathes, and gloriously detailed ships.

Pyle just made them up – the entire idea of colorful photogenic pirates wouldn’t exist without his illustrations. Likewise his portrayal of medieval heros, knights and damsels, fantastic castles and the appearance of legendary characters like Robin Hood was tremendously influential. Our modern picture of them, and much of fantasy art in general, can be traced back to Pyle and artists influenced by him.

Pyle was also a tremendously influential teacher and attracted the most talented illustration students of his time from around the country.

Pyle taught first at Drexel in Philadelphia, when the Pennsylvania Academy of the Fine Arts foolishly turned up their noses at the idea of a “mere illustrator” teaching at the prestigious art school (the willful blindness of fine art snobbery is nothing new), and he later opened his own school in nearby Wilmington, Delaware.

His influence on his students, and in turn their students and subsequent followers, is well established. Less is known, however, about Pyle’s relationship with other artists of the time who were not illustrators (at least not primarily — more 19th Century “fine” artists also did illustration than most people realize).

Pyle belonged to prestigious arts clubs in Philadelphia and New York, and socialized with influential American artists like William Merritt Chase, Winslow Homer and Augustus Saint-Gaudens. Pyle’s work was seen by European illustrators (just as he surely saw theirs as books and prints made their way across the Atlantic in both directions), and by other artists as well.

Pyle was active at a time when advances in printing processes were dramatically changing what could be done with reproductions of artwork in books and magazines. He not only ran with the new technology, adapting his painting style to take advantage of the capabilities it presented, he also reinvented and reinvigorated illustration in a number of other ways, moving away from the theatrical staging common at the time into more naturalistic and dramatic compositions and use of color. (I was tempted to say “more cinematic”, but of course, movies didn’t exist at the time.)

Note in particular his dramatic use of shadowed foreground figures and objects, silhouetted against bright backgrounds, a compositional tactic subsequently followed by other artists and illustrators (notably his brilliant student, N.C. Wyeth) as well as later pioneers of the cinema.

Pyle was also a history painter, carrying forward the European traditions of painting scenes from history, but in his case it was American history that was the subject of his dramatic and often gritty scenes. At the time of the first Centennial Exhibition, held here in Philadelphia in 1876, for which he was influential in the organization of the American art exhibit, Pyle felt that the work of American artists were coming into their own, taking their place on the world stage and worthy of the term “American Renaissance”. 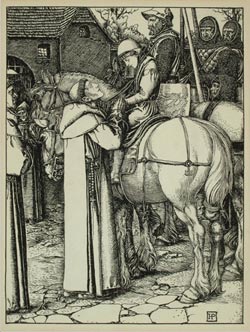 Pyle should also be counted among history’s great pen and ink artists, taking inspiration in particular from his strong admiration for the drawings and graphics of Albrecht Durer, as well as from pen and ink drawings by the Pre-Raphaelite painters and others working at the time.

The Delaware Art Museum’s exhibition presents works from several aspects of Pyle’s career; he was astonishingly prolific, particularly given the detail he often put into his pictures. These include unusual works not often seen and pen and ink drawings which can’t be frequently displayed because of potential damage from exposure to light. The exhibition frames them amid works by other, relevant artists who influenced or were influenced by Pyle.

If you get a chance to see the show in person, note that while the exhibition is in the changing exhibits galleries, the gallery in which Pyle’s most famous works are normally displayed has been used to expand the display of the museum’s collection of American Illustration, and the adjoining galleries, which normally display additional Pyle work, continue to do so, with many additional pieces that are not always on view. There is much to be discovered and enjoyed. (I’ve seen the show once, but will likely revisit several times before it ends its run.)

For those who can’t get to the museum in person, there is a newly published catalog accompanying the exhibition, that includes essays by art historians and Pyle experts, as well as an essay by contemporary illustrator and landscape artist James Gurney, who delves into Pyle’s working methods and compositions.

The museum has also made available an online gallery of Pyle’s work (note the second page), as well as online essays on his life and work.

Pyle’s influence probably reaches deeper than we can see, both in the history of popular culture and the history of art. The Delaware Art Museum’s Howard Pyle: American Master Rediscovered lifts the edges of the traditional map of art history, and gives us a glimpse of the workings underneath and of the lines of influence leading to and from this remarkable artist.