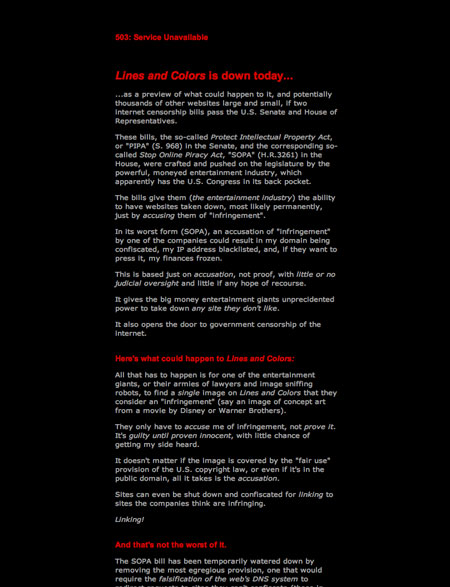 If you stopped by Lines and Colors yesterday, January 18, you may have noticed that Lines and Colors had gone dark, along with a significant number of other sites, in protest, and to raise awareness of the “anti-piracy” internet censorship bills looming in the U.S. Congress.

If you didn’t happen to stop by yesterday, but would like to know more about why it matters, what I had to say about the issue, and why the continued existence of Lines and Colors and websites like it hinges on the defeat of these bills, here is the page that was up in place of the site yesterday.

The effort to raise awareness of this issue across the web has apparently begun to have an effect, as a number of legislators have withdrawn their support for the bills, at least in their current form. But the fight is far from over; the hugely powerful and influential lobbies that represent the entertainment industry will not slink quietly away and call it a day; they will continue to pressure congress to give them the kind of extraordinary and frightening control over internet content that these bills provide.

Those in other countries may feel this doesn’t affect them (it will if hundreds or thousands of websites go dark at the whim of the big corporations), or you may feel frustrated that you can’t affect it directly. Right now, the spread of information and awareness is important, and those of you in Europe and elsewhere will soon enough have your own fight on your hands over similar legislation that these companies are trying to force into law around the world.

Those in the U.S. can directly affect the immediate danger of these bills passing by calling or writing your U.S. senators and representatives and urging them to reject the bills. Here is a site called Stop American Censorship that has more information on how easy it is to do that.

I’m not exaggerating when I say that if these bills pass, Lines and Colors, and significant other portions of the web, will cease to exist.

Link: My article: Stop PIPA and SOPA, or Lines and Colors may disappear
Stop American Censorship, site - info on how U.S. citizens can help prevent this from happening

20 Replies to “Stop PIPA and SOPA”