Like many, if not most, classifications of groups of artists, the “Hudson River School” was not a term invented by the artists themselves, but assigned by gallery owners and art historians to classify a number of artists with similar inclinations, most of whom worked in New York State in the mid-19th century.

Another assignment of a category by art historians on a sub-set of those painters is luminism, referring to painters who eventually began to dissolve the detailed representation of landscape into soft edged evocations of light and color.

Foremost among these was John Frederick Kensett, an American painter who studied in Europe, and whose initial admiration for the detailed naturalism of the 17th Dutch landscape masters, and the refined devotion to nature exemplified by Constable, gradually evolved into a Turneresque dissolution of detail-filled compositions into serene arrangements of land, sea and sky, in which light predominates.

Though dramatically different in painting style, the painters classed as luminists had in common with the later French Impressionists a desire to represent the effects of light and atmosphere. Over time, Kensett’s compositions became simplified, stripped of the inessential, and reduced to a poetic still point of light and color.

I very much like both phases of Kensett’s career: the wonderfully textural naturalism more commonly associated with the second generation Hudson River painters, and the lyrical whispers of his later canvasses.

Dishes with Oysters, Fruit, and Wine, Osias Beert the Elder

On Google Art Project, downloadable version on Wikimedia Commons. Original is in the National Gallery of Art, DC, which has a description of the painting. 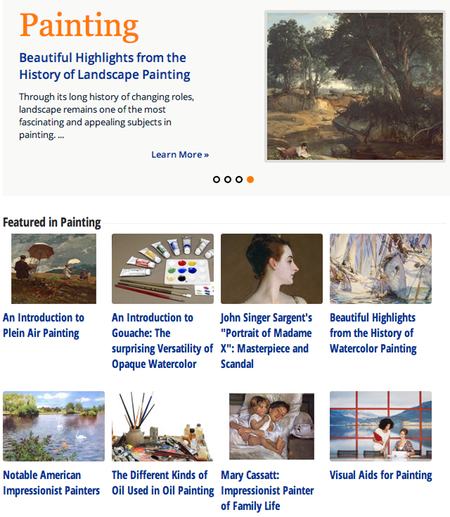 I have continued to write articles on painting for Answers.com, though this will be the last month in which I will do so.

My latest articles are:

What are Glazing and Scumbling in Painting?

An Introduction to Plein Air Painting

Beautiful Highlights from the History of Landscape Painting

The latter two articles are in the slide-show format.

There is and updated list of my articles on painting for Answers.com here on Lines and Colors at http://linesandcolors.com/answers

Klaus Pillon is a French illustrator and concept artist.

His atmospheric landscapes and environments are often cast in limited color ranges, with an emphasis on tone and accents of color to provide focus and drama. His command of atmospheric perspective and soft edges allows him to project a feeling of large scale in many of his pieces.

The number of pieces on his website and blog are limited, but there are more on his deviantARt gallery and CGHub portfolio.

There is also a gallery of his work on ImagineFX, which is where I encountered Pillon’s work.

On Wikimedia Commons, larger here. Original is in the Dallas Museum of Art. There is an article about the painting on the Wall Street Journal. You can get a sense of the scale of the painting in this photo from Steve Doherty’s blog.

Just in case you haven’t seen enough ice yet.

It’s not uncommon for artists to paint over, or scrape off and repaint, existing paintings. Oil paintings, in particular, lend themselves to this process, and a number of historical paintings have been shown by art forensics to have been painted over or repainted many times.

Normally, the goal is a finished painting that is better in some way than the previous version. However, Duane Keiser, a painter I have written about previously here on Lines and Colors, has taken the concept of repainting in a different direction.

Keiser has been engaged in a daily painting practice for a long time, and is in fact the originator of the “Painting a Day” phenomenon, as started on his blog of the same name back in 2004.

In 2011, I reported on his video of a painting experiment called Peel, in which he painted a tangerine as he peeled it — showing the different stages of peeling the fruit in multiple images — on the same panel, painting and repainting over images that most other painters might have considered finished (and salable).

I marveled at the artistic confidence involved in a process like that, and I marvel at it again in Keiser’s recent experimental Transitory Paintings.

In these two separate panels, Keiser has painted a landscape and a room interior of his studio. In each case, he is repeatedly repainting the same panel to reflect changing conditions of his subject in different seasons, light and time of day.

Keiser has a slowly changing slideshow of each painting in various stages on his website. Keep in mind while viewing these (and the screen captures I’ve posted above) that these are not a series of related paintings, but single paintings that are being repainted over and over.

The landscape has actually been sold, to friends of the artist, with the understanding that Keiser will occasionally remove the painting, paint over it with a new version of the scene, and then return it to them — a constantly evolving painting.