Casein (pronounced “kay’ seen”) is a water based paint in which the binder is the milk protein of the same name.

Casein is one of the least familiar of the water based painting mediums available to contemporary painters, even though it’s one of the oldest painting mediums known. Casein’s use can be reliably traced back over 9,000 years, with evidence of the formulation in cave paintings, and examples have been found in ancient Egyptian tombs from several thousand years ago.

There is new evidence that casein as a binder for paints may have been present in the oldest known examples of human use of painting materials, recently analyzed traces preserved in caves in South Africa from 49,000 years ago. (For reference, the oldest known examples of human writing — i.e. language, not just numbers — are only about 5,000 years old.)

Casein has a varied history, frequently used as an underpainting for oils and achieving its greatest modern popularity as a stand-alone medium in the mid 20th century, when it was popular with illustrators for its quick drying time, workability and easy-to-photograph matte surface. Like its gum arabic based cousin, gouache, the use of casein by illustrators was largely eclipsed by acrylic, which quickly dries impervious to water and subsequent applications of paint layers.

Casein has been in use as a decorative paint for furniture and other items, where is is generally referred to as “milk-based paint”; I’m not sure if the formulation is different from the artists’ paint. Casein has also been used as a ground for oil paints and for silverpoint drawing; the binder itself is a glue, used in undiluted form to glue furniture.

Casein has an interesting place in the spectrum of artists’ paints. It most closely resembles gouache as an opaque water based medium that dries to a beautiful matte finish. Like gouache, it changes value somewhat — generally lightening — as it dries. This can take a little getting used to and it can take multiple layers to produce satisfactory darks, but I find that more than offset by casein’s other qualities.

Casein is more full-bodied than gouache, and can be used a bit more thickly (though not in heavy impastos like oil). This makes it a little more like oil in terms of scumbling and creating interesting surface textures, and it can be particularly appealing to oil painters who want the speed and convenience of an alternative water based medium.

Casein also has a particularly nice characteristic of flowing off the brush, and can be applied to a smooth and even flat color surface, much like gouache.

Some have said they’re not fond of the scent of casein paint, but others, including myself, find it quite pleasant. Your mileage may vary.

Unlike gouache and watercolor, which can always be reactivated with water (either an advantage or disadvantage, depending on the artist’s needs), casein eventually dries to a surface more resistant to water.

Varnish can be applied to paintings that have dried for two weeks or so, either matte or glossy, the latter application bringing out the darks and giving the painting a look closer to oils. Care must be taken, though, not to disturb the surface when applying the varnish; and spray varnish is often recommended. You’ll find more detailed information on some of the sites I’ll list below.

Like gouache, casein is being “rediscovered” by contemporary artists, and appreciated for its unique characteristics. It is particularly suited, I think, for plein air painting.

“True” casein must be made up frequently by the artist, as it goes off in a day, or 4 or 5 if refrigerated.

Modern adoption has been greatly boosted by the availability of casein emulsion, a formulation of casein and drying oil that does not readily spoil and is available in tubes.

To make “true” casein, vinegar is used to separate out the liquid whey, leaving the curdled milk protein — essentially cottage cheese. This is dried and ground to a powder for future use or used immediately, and usually mixed with water and ammonium carbonate or clear liquid ammonia (though there are other formulations using lime or borax). The result is a milky fluid into which powdered pigments are mixed to make paint.

Already extracted and dried casein powder can be purchased from suppliers like Sinopia, Kama Pigments or Earth Pigments (recipe here).

The tube casein seems to have most of the wonderful working qualities and beautiful surface appearance of the fresh made version, and is certainly an easier approach to the medium. 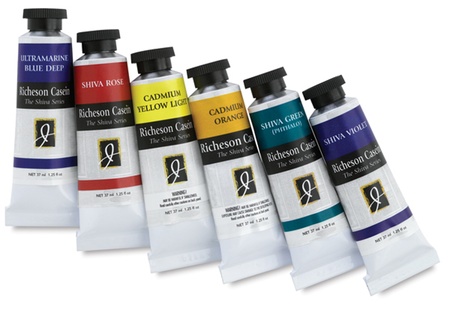 Jack Richeson & Co. is the most prominent provider of commercial casein paints, having bought the “Shiva” line and name from the previous manufacturer. Their casein emulsion paints are available through the majopr online art supply houses, though I understand that they may be difficult to find outside the U.S.

Plaka, by Pelican, is another brand of casein based paint, that I know is at least available in the UK, though it may be aimed somewhat more at decorative artists than painters.

Casein is generally less expensive that gouache, perhaps because the binder and formulation of pigment is less costly, I don’t know. It comes in large tubes of 37ml, similar to oil, as opposed to the small tubes favored for watercolor and gouache.

Casein, like gouache, is brittle when it dries, and if used thickly, should be used on a heavy watercolor paper, or ideally on illustration board or panel. Ampersand, which makes familiar painting panels for plein air artists, makes a line of Claybord, that they promote as being ideal for casein and gouache, largely because the clay infused primer is absorbent, in contrast to the non-absorbent surfaces of acrylic primer (“gesso”) favored for oil painting. I’ve also been working successfully on 140lb watercolor blocks and hot press Bainbridge Board (I use hot press because I prefer a smooth surface).

To a point, casein washes up like watercolor or gouache, but because it hardens to a water resistant form over time, more care must be taken to wash out brushes after painting, or keep them suspended in a brush washer. Casein is also a little rougher on brushes than watercolor or gouache, and like gouache and acrylic, it’s considered preferable to use synthetics. Because of the thickness of the paint compared with watercolor, casein painters often use brushes labeled for acrylic, somewhere in between stiffer oil brushes and softer watercolor brushes.

It can also be a little more difficult to get brushes clean, I use a little Murphy’s Oil Soap, I’ve also heard Greek olive oil soap recommended.

Casein is well suited to be used with gouache, the former giving body and texture, and the latter being even better for fine detail and sharp lines (though casein does well on its own in that respect).

Casein is often used with other paints, notably acrylic, in which acrylic plays the role of thin, transparent application and casein provides the ability to easily create thick, opaque passages — similar to the way watercolor and gouache are often used together.

There is a National Society for Painters in Casein and Acrylic, which sounds promising, but the navigation in their online galleries of competition winners is so terrible as to be almost unusable. You have to click to enlarge an image in a pop-up just to see the artist’s name, and even then there is no indication of the medium. You have to either look up each artist in Google and go to their own sites to look for the medium, or look for the winners of the “Richeson/Shiva Award For Casein Painting” as you wearily pop-up and close, pop-up and close, pop-up and close, in an attempt to find the few casein painters among the predominant majority of acrylic artists. Unfortunate; it might otherwise be a good resource.

Also unfortunate, and similar to gouache, is the dearth of information on casein use and painting techniques compared to other painting mediums. The Richeson site provides some information, and you can find casein mentioned in art materials compendiums, like Mark David Gottsegen’s The Painter’s Handbook, as well as in older books on illustration materials, like Rob Howard’s The Illustrator’s Bible.

A number of artists who work in casein feature short informational pages about the medium on their websites, and I’ll list some in my links, below. By far the best source I know of is James Gurney’s blog, Gurney Journey.

Gurney has for several years been working with casein, as well as gouache and other mediums, and has been sharing his experience and findings in the form of articles and short videos.

He has just released a new full-length instructional video, Casein Painting in the Wild, which I cover in a separate post.

One of the segments of his video demonstrates painting in a very limited palette of four colors, and artists who are curious about casein may want to try a similar approach to simply try out the medium.

Personally, I find casein to be a genuine pleasure to work with. I like the way it flows and handles, the textural possibilities and the appealing color and matte surface in finished paintings.

Artists who try it may be surprised at how nice it can be to work with.

[Addendum: David Clemons, who has painted in casein for many years, has been kind enough to add some additional information. Please see this post’s comments.]

18 Replies to “Painting with casein paint”