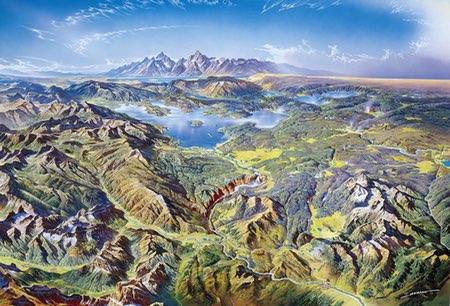 Heinrich Caesar Berann was a painter and cartographer from the mountainous region of Tyrol, Austria.

In the latter part of the 20th century, he was commissioned by the U.S. National Park Service to create panoramic map paintings of several of our national parks. These are available online as fairly large images on Wikimedia Commons, at resolutions of roughly 3500 x 5000 pixels (about 8 to 10 MB file size).

I’ve posted an image and two detail crops of his painting of Yellowstone above. The bottom one is about maximum resolution of the image on Wikimedia.

The National Park Service has published super high resolution images of four of the paintings at more than twice that resolution and considerably bigger file size (roughly 100 MB).

Berann also did imaginative figurative paintings and more down to earth location drawings, which you can find on a website maintained by one of his grandsons.The site includes a list of all of Breann’s panoramas of locations in various countries on several continents.

(I previously featured a contemporary artist, James Niehues, who applies a similar approach to images of ski and golf resorts.)