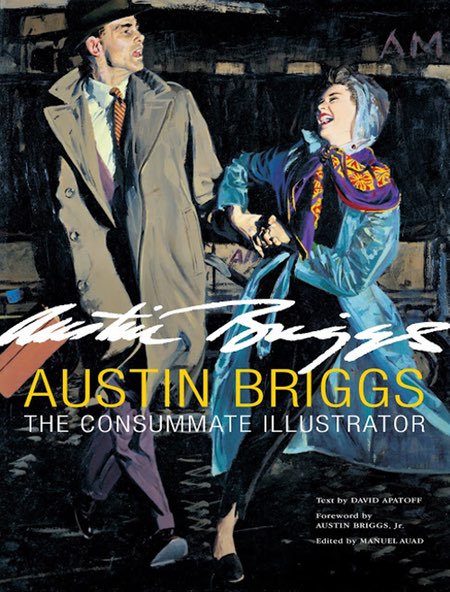 I initially encountered the work of Austin Briggs (see my previous post) in his role as a comics artist — working as an assistant to the great Alex Raymond, and eventually ghosting Raymond’s Flash Gordon newspaper strip, and taking over in a credited role on Secret Agent X-9.

Briggs’ work in comics was a sideline, however; he was primarily known as one of the great American illustrators of the 20th century. He started in advertising illustration, but moved into editorial illustration, which is where he made his mark, providing illustrations to prestigious magazines like Redbook, Cosmopolitan, and The Saturday Evening Post.

Briggs was a relentless experimenter; he was always pushing the boundaries of his approach to illustration, and expanding the language and range of that art form in the process.

I was delighted to receive a review copy of a new book from Auad Publishing that showcases the work of Austin Briggs from all phases of his career.

Austin Briggs: The Consumate Illustrator is an absolutely beautiful volume; nicely sized at 9×12″ it features 160 pages crammed with Briggs’ illustrations in both color and black and white. Briggs exceled in both areas, his black and white and tone drawings are remarkably economical given their power and expressive nature. His color work is simultaneously bold and subtle.

The range of his work, its dynamism and nuance is captured beautifully in this volume from Auad. They already have a reputation for presenting the work of great illustrators with high production values and great attention to detail and selection, and this book continues in that fine tradition.

The book includes a knowledgable and fascinating text by David Apatoff, that drew on an interview Apatoff was able to conduct with Briggs’ son, Austin Briggs Jr., who also contributed the forward.

Apatoff has two posts about the book on his own, always excellent blog, Illustration Art: here and here.

I had seen some of Briggs’ work in pieces here and there, but to see a collection like this upped my impression of his accomplishments even further. I recommend the book highly and suggest that if you’re interested, you should order sooner rather than later. Auad Publishing limits their print runs and does not do reprints.

Austin Briggs: The Consumate Illustrator is available direct from Auad Publishing for $34.95 plus $5 domestic shipping.

There is a small set of preview images on the Auad site if you click on the book cover image. I’ve added general links to Austin Briggs material below. You can find more if you do an image search for Austin Briggs. 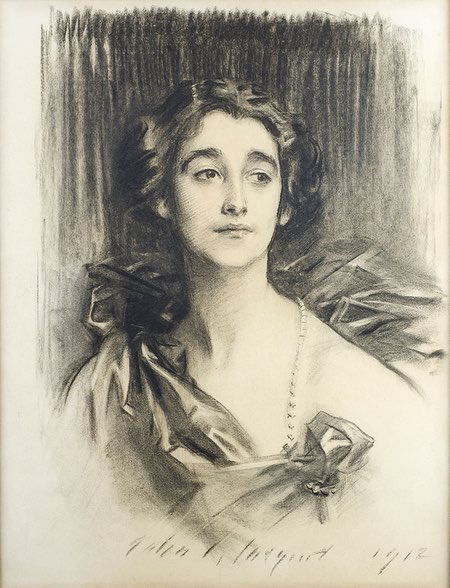 John Singer Sargent is known for his bravura society portraits in oil, as well as his masterful watercolors. The latter were painted largely for his own pleasure as he traveled. The former, which were his stock in trade, came to weary him late in his career, and at one point he simply stopped doing formal portraits in oil.

He continued creating portraits, however, but in the form of charcoal drawings. These are wonderfully economical, deceptively simple but insightful and evocative of personality. They are also beautiful examples of the power of charcoal and of chiaroscuro.

The Morgan Library and Museum in New York, which has a history of presenting wonderful shows of drawings, has mounted a show of Sargent’s charcoal portraits drawings in cooperation with the National Portrait Gallery in Washington, DC.

John Singer Sargent: Portraits in Charcoal, will be on display at the Morgan Library until January 12, 2020. The exhibition will then move to the National Portrait Gallery, where it will be on display from February 28 to May 31, 2020.

The Morgan Library has a small set of preview images, which I’ve used for my examples, above, and I’ve linked to another source on Wikimedia Commons, though the quality of the reproductions there varies.

There is a catalogue accompanying the exhibition. For those on a budget, there is an unrelated Dover paperback of Sargent Portrait Drawings. 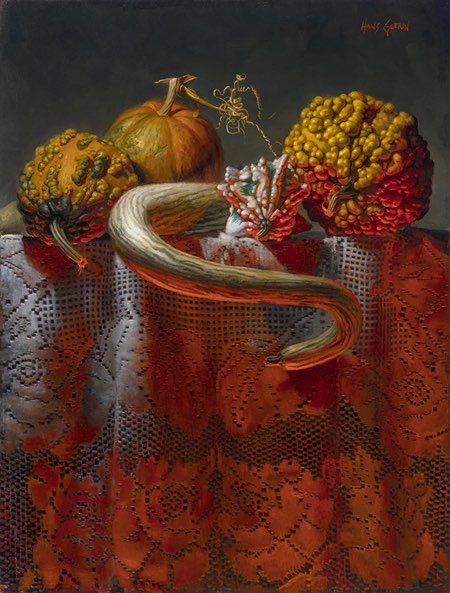 Hans Guerin is a painter based in Maryland whose subjects include figures, portraits and still life.

Among them, what I find most compelling are his still life paintings that follow the play of light across the richly colored, textural surfaces of pumpkins and other gourds.

You can find a number of his paintings on his website, which is shared with his wife, painter Beth de Loiselle Guerin.