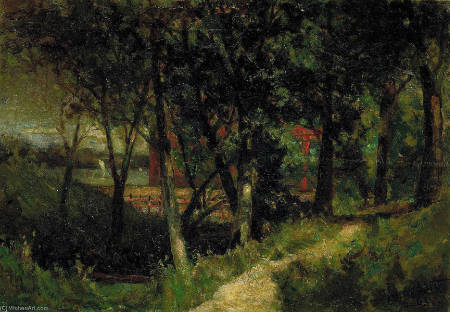 Edward Mitchell Bannister was a Canadian-American painter active in the late 19h century. Born in New Brunswick, he emigrated to the U.S. — initially to Boston — and spent much of his life and career in Providence, Rhode Island.

Though he painted a variety of subjects, Bannister is known primarily for his serene pastoral landscapes, done in the American Tonalist manner.

Bannister had little formal art education, and could not afford to travel to Europe to study like many of his American contemporaries.

For someone self taught, he quickly gained recognition and honors, one of which was a bronze medal for his painting “Under the Oaks” (the current location of which is unknown) at the 1876 Centennial Exposition in Philadelphia. When he went to receive his award, the judges wanted to withdraw the bronze on discovering that Bannister was African American. The other competitors insisted that the award be given as initially judged and he received the bronze medal.

Bannister was a strong supporter of the effort to gain equal rights for African Americans, but chose not to make overt social issues a subject of his painting, preferring instead to focus on a more spiritual sense of harmony and peace.

In keeping with other American Tonalist painters, who were strongly influenced by the painters of the French Barbizon School, Bannister often grouped his masses into strong value shapes, at times so dark as to be almost silhouettes.

It has been suggested that some of Bannisters paintings have grown darker over time. Perhaps this is due to a painting practice, medium or other factor that he might have been discouraged from using if he had access to formal art education; I don’t know.

Bannister’s dark value statements and brusque brush work gave way to a lighter, more Impressionist influenced style later in his career. Bannister was a board member of the Rhode Isand School of Design and a founder of the Providence Art Club.