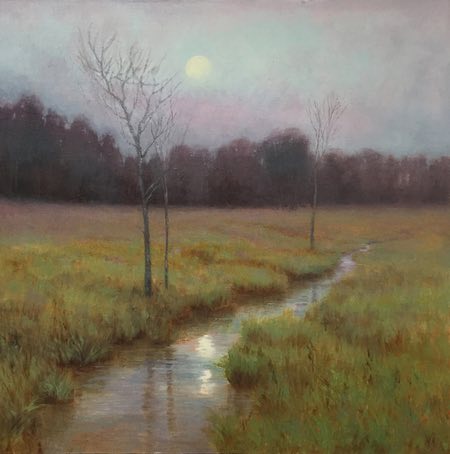 Deborah Paris it a painter based in Texas who works in a tonalist manner — with controlled palettes, restrained values and soft edges — though she sometimes incorporates more directly naturalistic elements and occasionally works with a brighter palette.

Her favored subjects are woodlands, streams and fields, painted with a sensitive eye to mood, atmosphere and the power of visual suggestion.

In addition, Paris is the author of a recently published book, Painting the Woods: Nature, Memory and Metaphor that is both a personal account of her experiences while spending a year in Lennox Woods in northeast Texas and her creative process while painting the landscape there. (Bookshop.org link, Amazon link).

Also available is a book from 2014, Deborah Paris: Lennox Woods – The Ancient Forest that is also about those experiences but was apparently authored by other writers. (Bookshop.org link, Amazon link)

Under the “Blog” navigation link on her website, you will find three blogs; one current, one archived and one devoted to the teaching atelier.

There is an interview with Paris as part of the Savvy Painter podcast. 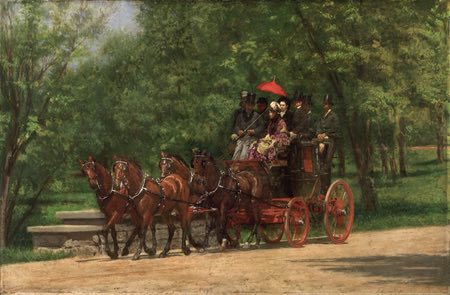 The late 19th century is one of my favorite periods for art. Not only were a great many of my favorite artists active in that time but I’m constantly discovering artists from the period who are wonderful and new to me.

Wikimedia Commons, that cornucopia of images provided by the Wikimedia Foundation, has a number of wonderful ways to explore images, such as lists of artwork by medium, artist, subject, location, genre, and time period.

One of the the choices I favor for exploring is Paintings by Year. In particular, I find I can choose almost any year in the late 19th or early 20th century and hit paydirt right away.

I posted an article like this previously in which I featured a few paintings from 1879.

This time I picked 1880. To keep it simple and make it easy for those interested to find larger reproductions of the paintings shown, I’ve limited myself to works accessible from these two Wikimedia Commons pages: 1880 paintings and 1880 oil on canvas paintings.

You can find jumping off points on those pages that will take you right down the rabbit hole into wonderland, so I will issue my customary Timesink Warning. 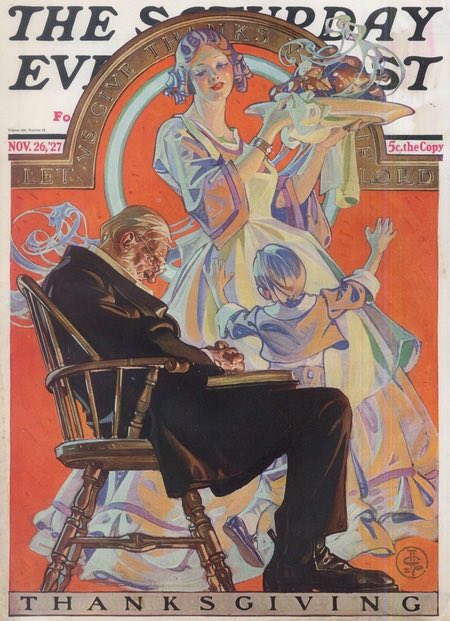 Link is to the largest image of this painting I could find, which is on Pinterest. If that doesn’t work for you, try this one.

Another wonderful holiday cover for The Saturday Evening Post by the brilliant American illustrator J.C. Leyendecker.

I love the way the visible scent of the steaming hot turkey is drifting down around the snoozing grandpa.

I also love the value contrasts between the dark almost silhouette of the grandfather and the lighter figures of the mother and child, who Leyendecker has managed to push back in the frame, despite their higher chroma. I also admire the way he has handled slightly muted complementary dolor contrasts in the oranges and blues in the face and clothing of the mother.

We have more of those wonderful trademark Leyendecker folds in the clothing, but somewhat flattened and posterized compared to his usual super-dimensional treatment.

The figure of the mother and child are more or less outlined, but with outlines of color rather than black, and the outlines playfully become lost and found (as in the portion of the mother’s right forearm between her sleeve and bracelet).

The color outlines, as contrasted with the dark outlines on the chair, are characteristic of a technique later used in late 20th century and modern American comics called a “color hold”, in which colors are substituted for formerly black outlines to push a figure to the back.

Rarely do I examine an image of a Leyendecker painting without going “Wow!” under my breath.

Have a good — and safe — Thanksgiving! 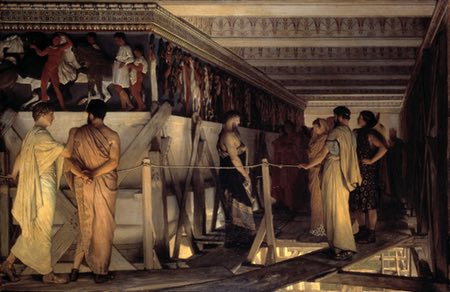 Pheidias and the Frieze of the Parthenon, Lawrence Alma-Tadema; oil on wood panel, roughly 28 x 44 inches (72 x 110 cm); link is to the file page on Wikimedia Commons; original is in the collection of Birmingham Museums, UK.

Also known as Phidias Showing the Frieze of the Parthenon to his Friends, Alma-Tadema’s painting shows the great Greek sculptor and architect showing off his frieze in the Parthenon, the temple in Athens dedicated to the goddess Athena, of whom Phidias also created the
monumental statures known as the Athena Parthenos and the Athena Promachos, inside and outside the temple.

Historians have identified some of the figures in the painting as Pericles, Socrates and other known individuals of the time.

I love the way Alma-Tadema has lifted us up on the scaffolding near the ceiling with Pheidias and his guests, and heightened the drama with contrast between the darkness in the rear portion of the scaffolding and uplighting from the chamber below. 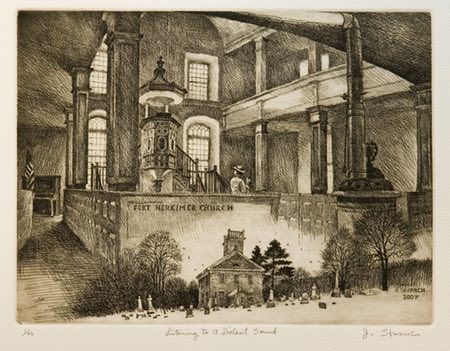 James Skvarch is an artist I featured back in 2007. He is primarily a printmaker working in traditional methods of etching. He uses to advantage the characteristics of etching that allow for delicate lines and hatching for tones. When printed on cream or off-white paper, these provide a visually appealing controlled contrast.

His website galleries are divided into sections for Landscapes, Interiors, Ships, Cars, and “Caprices” or imaginary structures; the latter inspired by the architectural fantasies of Giovanni Battista Piranesi.

There is also a section for “Paintings”, though the ones shown are few and older. There seems to be a bit of a disconnect in that regard between his website and his Facebook page, which features more recent paintings (images above, bottom).

As much as I enjoy his etchings of caprices, I admire even more his landscapes and interiors, which capture a sensation of light, place, and the texture of materials and objects.

I particularly enjoy his etching of Fort Herkimer Church (images above, top, with detail), in which he incorporates a landscape showing the exterior of the church into his drawing of the building’s interior. 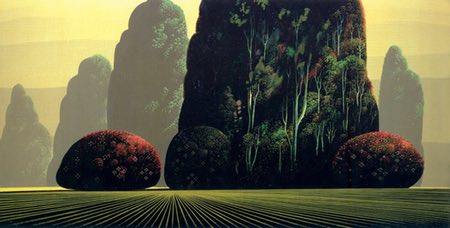 I don’t know the title or the size of this serigraph by ex illustrator and former Disney background artist turned gallery artist Eyvind Earle. I just know it’s wonderful.

I love the exaggerated atmospheric perspective, the trademark stylization of the trees, the splashes of light across the trees and shrubs and the perspective imparted by the geometric indication of field rows.

My link is to the image posted on Muddy Colors as part of this article.

For more, see my previous posts on Eyvind Earle, linked below.