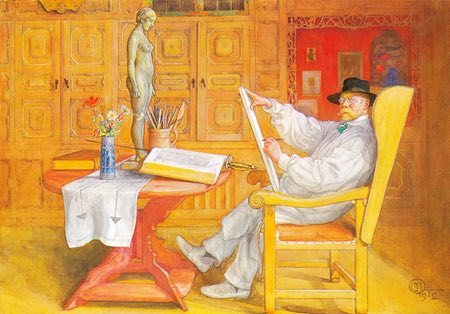 Carl Larsson was a Swedish illustrator and gallery artist active in the late 19th and early 20th centuries.

Though he also worked in oil and painted large frescos, Larsson was primarily known for his watercolors.

With a deft hand and a light touch, he depicted family and home in particular. In many cases, he used room interiors designed by his wife, Karin, who was an interior designer, and many of his watercolors take as their subjects his own home and family.

Before devoting himself to his most famous domestic scenes, he worked as an illustrator. Not very successfully at first, but his popularity shot up when magazines started to more regularly feature color illustrations.

For a short while, he painted en plain air in the Forests of Fontainebleau with members of the Barbizan school.

There are a number of his works in the Swedish National Museum of Fine Arts, including frescoes on several walls, but Larsson was disappointed when a painting the museum had commissioned, and for which a particular wall was prepared, was rejected by the museum’s board, apparently a victim of political fighting among various factions of the Swedish art community.

The painting, titled Midvinterblot (Midwinter Sacrifice), was considered by Larsson to be his best work. After refusal by the museum board, it was sold to a Japanese collector, and only a few years ago, was repurchased and permanently hung in its original intended place in the museum.