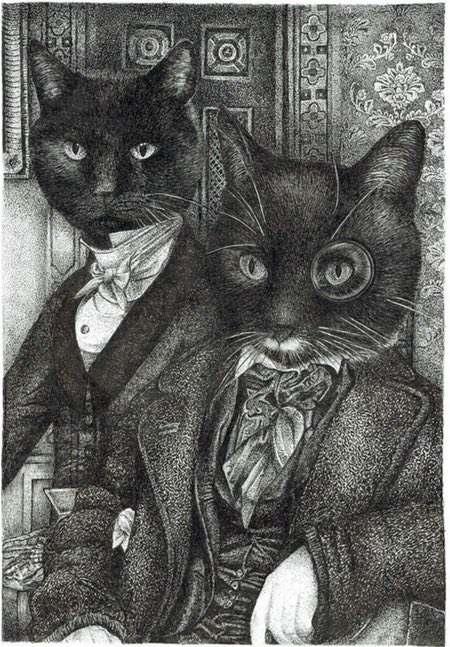 Julia Hill is an illustrator based in Devon, England who works primarily in pen and ink, using fine-line markers. Her main subject is animals, both domestic and small wild. She also indulges in whimsical fantasy illustrations with animals in human clothing and situations.

Her website is basically her store, so her primary online gallery appears to be her space on DoodleAddicts.

Some of the entries on the DoodleAddicts site include process step-throughs, and more information about her choice of pens and paper. She works with a lot of fine hatching to create tones and textures.

The DoodleAddicts website also offers a short interview with the artist, in which she also talks about her materials. 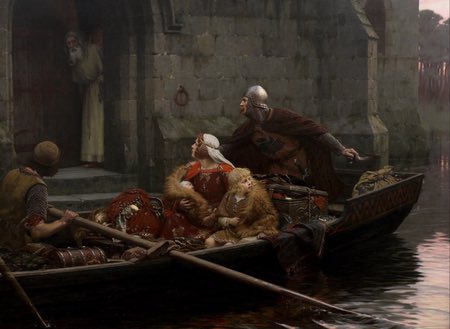 Edmund Blair Leighton, a British artist active in the late 19th and early 20th centuries, was known for his scenes of medieval and turn of the 19th century times. Here, he gives us a medieval scene in which a well to do family seeks refuge at a monastery, while the eldest child appears to see imminent danger close behind them.

I love the tactile feel of Leighton’s rendition of stone, wood, fur, cloth and metal. For some reason, I particularly enjoy the subtle highlight on the tiller. 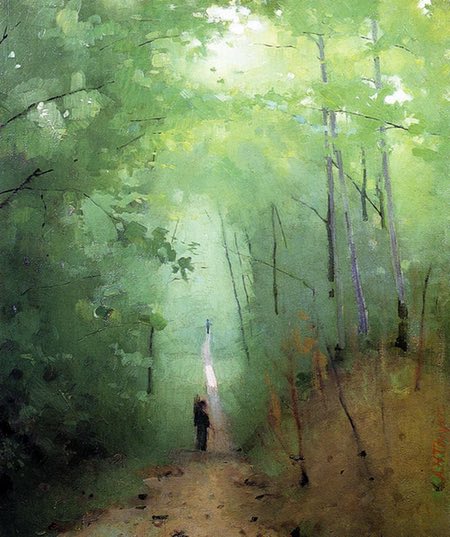 Wikimedia Commons, with its wonderful, clunky mishmash of art images — superb high quality high resolution images from the best sources next to low resolution low quality and off color images from questionable sources — has some equally eccentric systems of categorization, which results in the delightful ability to browse through a category like “Paintings of forests“, and highly specific subcategories like “Paintings of forêt de Fontainebleau” (the forest of Fountainebleau).

The forest of Fontainebleau is an area of still relatively wild forest and rock formations about 35 miles (60 km) southeast of Paris. It attracted the first wave of painters known to paint en plein air in significant numbers.

Initially it was Corot, and then other painters who were similarly interested in painting directly from nature, and who would collectively come to be known as the Barbizon School, named for the nearby town that was their base. Later they were joined by the early French Impressionists, who were highly influenced by the Barbizon painters.

The images above were all selected from the single Wikimedia Commons page for paintings from the forest of Fountainebleau — on which you will find more examples, as well as links to higher resolution images, and even links to subcategories of that category. 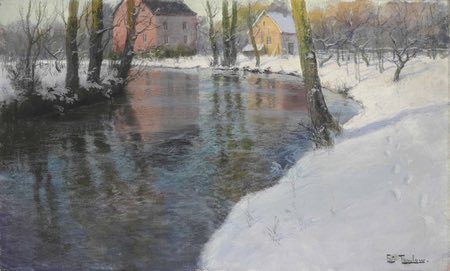 Winter Landscape, Frits Thaulow, pastel and watercolor on canvas, roughly 22×36″ (55×92 cm). Link is to past auction on Christie’s (large image here), I would assume present location is a private collection.

No one painted the surface character of small streams, winter or otherwise, like 19th century Norwegian Painter Frits Thaulow.