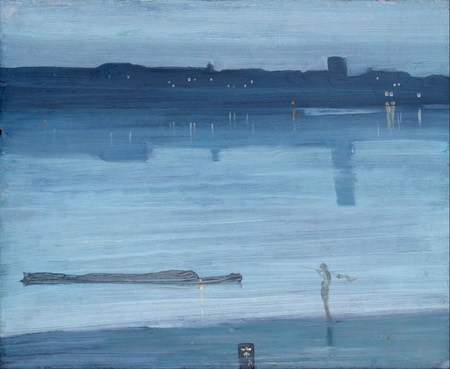 Link above is to Zoomable image on Google Art Project; original is in the Tate, London; downloadable large file on Wikimedia Commons.

Whistler often titled his pieces in musical terms; many of his works are titled “Symphony in…” or “Arrangement in…”. This is the first of a series of works titled “Nocturne:…”, which originally referred to dreamy, lyrical musical compositions meant to evoke the calm and romantic charm of the night. The term has now come to also mean visual art pieces of a similar nature, due in large part, I think, to the use of the term in Whistler’s titles for this series.

According to the Tate, the term Nocturne was first used in reference to Whistler’s paintings by art collector Frederick Leyland. Whistler picked up the term and ran with it.

The painting is barely a whisper of blue-gray brushstrokes on a gray ground, simple horizontal and slightly diagonal brush marks indicating the calm water of the Thames River just before sunset. This calm field of color is punctuated by small dots of light in the vague silhouette of the city, each accompanied by their vertically smeared reflection in the water.

Aside from the small dot of color in Whistlers icon-like signature — inspired by Whistler’s fondness for Japanese woodblock prints, which is also quite evident in the composition of this and other paintings in a similar vein — there are only two small areas of the painting with color: a yellow-orange light on the distant shore, and its reflection, and an echoing yellow-orange light on the skiff or barge in the foreground.

A figure in a bowler hat — carrying what appears to be a net over his shoulder — stands on the immediate shore, which is barely distinguished from the water. Both the watercraft and the figure are also mere wisps of translucent paint.

To my mind, this is a most remarkable image, and a testament to the power of suggestion in painting.