Armand Baltazar is a concept artist, illustrator and gallery artist based in California.

Originally from Chicago, he studied at the Art Institute of Chicago, Northern Illinois University and after a time working in advertising, went on to to earn a second BFA in illustration from the Art Center College of Design in Pasadena.

His animation concept art credits include Prince of Egypt, The Road to Eldorado, Sinbad, Shark Tale and Flushed Away.

His online portfolio is divided into sections for animation, illustration and fine art. In the latter two you will find examples of a rough textured painterly stye that is a wonderful counterpoint to his more refined concept and illustration pieces.

His gallery paintings include figure painting and drawings as well as subjects like farm machinery and trains. 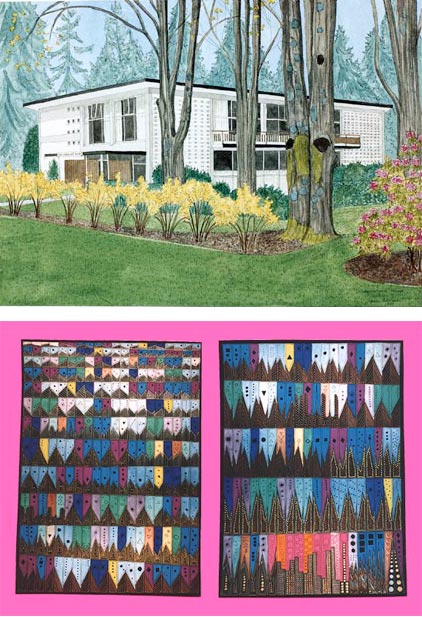 The New York Times has published an article, A Disease That Allowed Torrents of Creativity, on the case of Dr. Anne Adams, a Canadian scientist who suffered from a form of dementia called frontotemporal dementia, or FTD, in which certain parts of the brain are adversely affected and diminish in function, while others are apparently enhanced by some compensating action within the brain itself.

FTD is often misdiagnosed as Alzheimer’s disease, but it’s actions are different and more specific to certain parts of the brain. Adams’ particular affliction was a variant of FTD called primary progressive aphasia, PPA, in which patients lose the ability to speak. The action of the disease apparently releases inhibitions on other areas of the brain, enabling them to increase their function, in this case, the right posterior brain, which brain researchers have been coming to associate with artistic endeavor and creativity. Artists who suffer damage to that part of the brain often lose their creative abilities.

Adams, a scientist and gifted mathematician, lost her ability to work with numbers along with her speaking abilities, and began to exhibit a desire to create visually. She had a passing interest in drawing when she was younger, but never pursued it. To the surprise of her family, she abandoned her scientific work and took up art with an uncanny intensity.

At first she was painting architectural house portraits of houses in her neighborhood. As things progressed, she became fascinated with the music of composer Maurice Ravel, who, unknown to her, had suffered from the same disease.

Ravel composed Bolero, his most famous composition, while he was suffering from the disease. Adams became fascinated with this work in particular and created a visual interpretation of the musical piece. An expert in this kind of brain disorder has described Ravel’s piece as “an exercise in compulsivity, structure and preservation”.

You can see Adam’s interpretation, called Unraveling Bolero (image above, bottom) on a page devoted to Adam’s work on the Patient Art Gallery web site of the Memory and Aging Center of the University of California at San Francisco. Unfortunately, the page is in frames, so I can link directly to it for you. It’s the 5th thumbnail down, with the magenta border. There you will also find other examples of her work, like her paintings of houses and buildings, and other pattern based work, like her interpretation of Pi.

You can also find examples of Adam’s work here, along with a complete series of wonderful, almost Escher-like illustrations from An ABC Book of Invertebrates, by Adams and her husband, Robert Adams.

So here we have a disease that apparently rearranges the brain’s functions, and in these rare cases, unleashes a flood of creativity.

Like I said, you don’t want to get it, but it may help us understand the creative processes of the human brain a little better; just as the cases of artistic savants like Stephen Wiltshire and Gilles Tréhin can tell us some thing about the function of memory and mental visualization in relation to drawing.