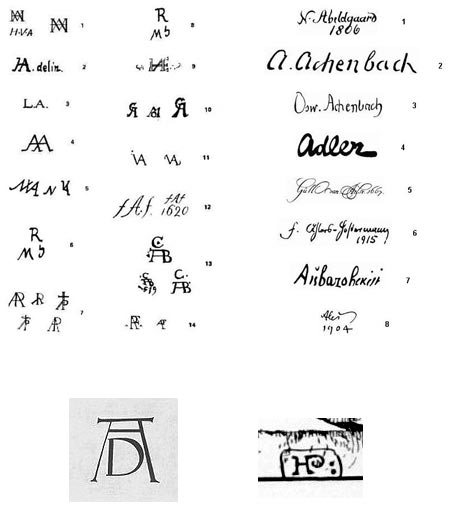 An important but often overlooked aspect of creating a finished painting or drawing is the application of a signature by the artist.

Simultaneously claiming authorship and declaring the work finished, signatures are a source of pride to some artists, and a necessary chore to others.

Prized by collectors, to whom attribution is often more important than the actual character of the work when considering art as a commodity, signatures are both boon and bane to those who must establish attribution of historical works, and have to deal with illegible, confusing and often forged signatures and marks.

Throughout history artists have signed their work in any number of ways, often with cryptic marks or monograms, as much a design element as a recognizable mark of the artist’s name.

I’m often admired the monograms of artists like Albrecht Durer (above, bottom left) and Howard Pyle (bottom right), which seem “right” and are pleasing designs in themselves.

There is a nice feature on the ArtArchive on Artist Monograms, and Artist Signatures (I’ve had to pop these out of context to link to them because the site is in frames for some unknown reason.)

Viewing is slightly awkward, in that the marks and signatures are arranged on sheets in groups, on a separate page from the list of names, and associated by number. Click on the linked name ranges to open the pages with the graphics (maybe use the contextual menu in your browser to open them in a separate window so you can have them side by side).

The images at top show a page monograms and one of signatures from the ArtArchive site.

There is also another site devoted to Artist Signatures that is mostly of interest to serious collectors who are willing to pay a fee for full access. For casual browsers, the signatures section is pointless, but the monograms section can be browsed by first letter just to see some of the variety (particularly if you’re trying to design your own artist’s monogram). Listings of the artist name associated with the monograms, however, are behind the paywall.

The Artist Signatures site is by John Castagno, author of several of the most widely recognized authoritative books on the subject, beginning with Artists’ Monograms and Indiscernible Signatures, and continuing with a series (all of which are on the expensive side, but presumably valuable for collectors and dealers).

7 Replies to “Artist Monograms and Signatures”