Stuart Immonen is a Canadian comics artist and cover illustrator with a crisp, confident style. His drawings can have a loose, stylized and modern feel, but are always based on an underpinning of solid draftsmanship.

Immonen has done work for mainstream comics companies like Marvel, DC, Dark Horse, Image Comics and the French publisher Les Humanoides Associés. Most of his work in recent years has been for Marvel, where he has worked on high-profile titles like The Hulk, Ultimate Fantastic Four and Ultimate X-Men.

I particularly enjoyed his run on the Ultimate X-Men last year, an 11-issue arc (#54-65) inked by Wade Von Grawbadger and colored by Justin Ponsor.

For those not familiar with the process, mainstream American comics are usually created by an artistic team, the art being broken down into pencil art, final ink drawings and then color, usually applied digitally. This allows for the creation of 22 page continuing stories on a monthly basis. (Personally, I think the old practice of crediting the color artist on a level with the letterer rather than equal to the inker is way out of date. Ponsor’s nice work on this series is a case in point.)

Immonen started in comics by self-publishing a series called Playground. He moved from there to small companies and then the major publishers. In addition to his mainstream comic work, he still produces his own work in the form of webcomics. He has two titles, Never as Bad as You Think and Misery Loves running on the subscription based Webcomics Nation comics portal.

In addition to Immonen’s own site, which is somewhat disappointing in the limited amount and scope of the artwork in the galleries, I’ll suggest the unofficial galleries on Comic Art Community, as well as some interviews from Top Two Three Films (re: their Adventures into Digital Comics film), Sequential Tart, and Newsarama, in which he discusses his 50 Reasons to Stop Sketching at Conventions, a painfully humorous insight into what comic artists sometimes put up with at comic conventions.

With the Mona Lisa as a starting point, Joan C. Gratz took paintings by 35 artists, rendered her versions of them in colored clay, animated parts of them and morphed them into one another in a fun, short (7 minute) animation set to music and sound effects called Mona Lisa Descending a Staircase.

Aside from Da Vinci’s enigmatic portrait, the majority of the works are from the 20th Century. Particularly fascinating are the sequences where she morphs a face or figure from one painting into a face or figure form another. It’s nicely done and fun just to try to identify as many of the artists and paintings as you can.

(Although Duchamp is in evidence in the image of his mustache and goatee’d postcard version of the Mona Lisa, seen here morphing into Magritte’s The False Mirror, I didn’t see the titular Nude Descending a Staircase.)

Gratz works in a fascinating animation technique (which I believe she pioneered) called “clay painting” in which colored clay is used as if it were paint. The advantage is that the clay can be repositioned and re-blended in a way the permits the creation of stop-motion animation, similar in principle to the the 3-D stop motion process used in popular films like Tim Burton’s The Nightmare Before Christmas, Nick Park’s The Curse of the Were-Rabbit and an entire school of Eastern European animation called Puppetfilm.

Mona Lisa Descending a Staircase won the 1002 Academy Award for Best Animated Film. Gratz also applies her clay painting animation technique to commercial work and you may have seen her spots for Coke, Wishbone and Microsoft. If not, they are beautifully done and well worth checking out. 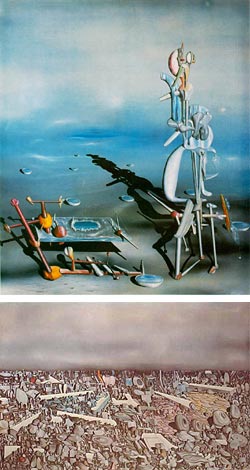 I became a fan of of science fiction artist Richard Powers without knowing it.

As a teenager I read a lot of science fiction and much of it was in the form of inexpensive paperbacks from the 60’s that I would come across in used book stores.

While there were a number of cover artists for these books that I enjoyed, there seemed to be two major styles. One was the straightforward style that involved a more or less realistic depiction of spaceships, robots, alien landscapes (that usually looked like the rocky parts of the American West for some reason) and adventurers in spacesuits. Some cool and fun stuff, but pretty much what you would expect for an art style that evolved out of the wonderfully lurid pulp covers of the 40’s and 50’s.

The other style was… something else.

In the midst of the more prosaic cover art, there was a variety of truly weird and bizarre images that looked like the paintings themselves had come from another world (or another dimension or the mind of an incomprehensibly alien creature from beyond the reaches of known space). It was the kind of imagery that prompted a reaction of “Wow! I don’t know what that is, but it is unbelievably cool!”

There was a fair bit of variety within this second style, just as in the first, and even though it often appeared on the covers of books from certain publishers (Ballentine and Ace), I assumed it was the work of several artists who were just out on the fringe of the science fiction cover art, or else were all actually sending in the work from beyond the moons of Jupiter. I didn’t realize at the time that they were pretty much all the work of one artist.

Richard Powers started with a more conventional science-fiction style, painting the usual spaceships, aliens and women in other-worldly distress, but like someone whose mind has been invaded by the tendrils of an alien intelligence, his work started to get stranger and stranger, eventually dropping almost all pretense at representing normal science fiction subjects and evolving into a style somewhere between non-representational and the realistic depiction of unrecognizably strange objects.

Powers was, in fact, under the influence of bizarre alien intellects – he had discovered Surrealism. His work shows the wonderfully strange impact of the dream and subconscious inspired work of Surrealist painters like Max Ernst, Paul Klee, Joan Miro and, in particular, Yves Tanguy.

Unfortunately, I can’t point you to a grand repository of Powers art on the web, so I’ll have to give you scattered links to some modest galleries, bios and articles.

There is a collection of his work, The Art of Richard Powers by Jane Frank (from Paper Tiger, with an intro by Vincent Di Fate) that is out of print, but available from used book sources or through Amazon.

Thanks to Jack Harris for links and info.

Addendum: The Art of Richard Powers, a beautiful and insightful book written by Jane Frank and published by Paper Tiger is available dierctly from her WoW-Art.com site. Frank also has Richard Powers original art for sale thorugh the site! (Search by Artist on in the laft hand column.) 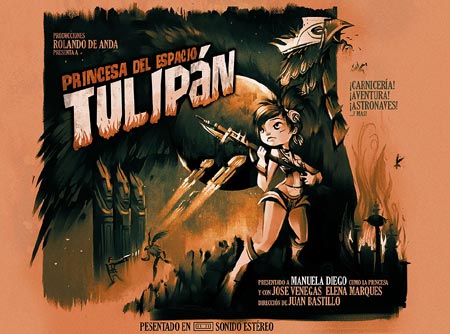 When I profiled Chris Turnham and his fresh, lively illustrations and concept art back in January, he immediately wrote me and suggested I check out his friend and fellow illustrator Kevin Dart.

I immediately checked out Dart’s snappy, wonderfully styled and colored illustrations, was immediately impressed and just as immediately got distracted and neglected to follow through with a post. I’ll correct that today. (Hey, it only took me 6 months.)

Kein Dart’s site is arranged as a blog with links at the top to a Gallery, About page and some Extras, including some photo journals, a tutorial and two slideshow style animations of his drawing process.

The Gallery contains real book covers as well as some made-for-fun book covers and movie posters in which Dart indulges in his obvious affection for 60’s modern style movie posters and paperback covers. There are also some sketches and a short CGI animation called Gertie Gutless.

Turnham and Dart have a created a collaborative site to sell prints of their work called Fleet Street Scandal that has galleries from both artists. 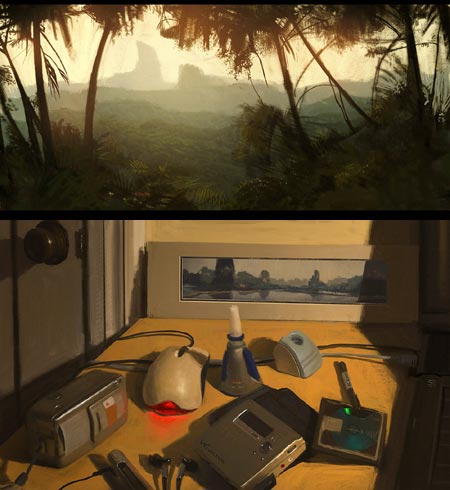