UK painter, illustrator and designer Lawson Wood found a rather unique niche for himself amid the great turn of the 20th Century illustrators by going ape.

Though he portrayed many other subjects, and even had other comic illustration series with particular themes, notably police officers and prehistoric scenes, it was his comic illustrations of apes and monkeys, rendered as if they were Leyendecker models in all their finery, that made his reputation.

he used his apes in a variety of situations, even painting ape caricatures of Hitler, Stalin and the Japanese Emperor during World War II.

His own character, the aged Gran’pop, appeared several times on the cover of Collier’s and was under consideration for an animated cartoon before war broke out.

ASIFA-Hollywood Animation Archive has a great selection of Wood covers, click on the in-page images for larger versions.

British animator and illustrator Errol Le Cain was a member of Richard William’s animation studio in the 1960’s when they were producing the terrific and influential animated opening credits for films like A Funny Thing Happened on the Way to the Forum and Casino Royale (the original, weird one). He also worked on William’s The Thief and the Cobbler.

While he was working with William’s studio, Le Cain began to illustrate children’s books, developing a colorful style lush with patterns, textural design elements and Art Nouveau touches. In many ways his style seems like a continuation of the traditions of the European Golden Age illustrators (see the links in my recent post on Ivan Bilibin) without feeling like an emulation of any of them.

Le Cain went on to do extensive animation work for the BBC, continuing to create illustrations for children’s books into the years before his death in 1989.

Most of his books are out of print, but if you look around you can find them used.

There is a site devoted to his illustration work, The Illustrated Work of Errol Le Cain maintained by Tania Covo. Though it doesn’t have a gallery, per se, it has a list of his published work and the page for each title features two of his illustrations from that book.

Though denigrated in subsequent times (and at the time by upstarts like the Impressionists), history painting was the core of mainstream academic painting, then the artistic establishment; and Delaroche, along with Eugéne Delacroix and Théodore Géricault, was among its chief proponents.

Delaroche was a student of Antoine-Jean Gros, and a teacher of many notable artists, including Charles-François Daubigny and Jean-Léon Gérôme.

Very popular in his day, his paintings represented what many find appealing, and others find objectionable, about academic art — superb draftsmanship and flawless technique, but, despite their drama, little investment of emotion or passion on the part of the artist.

Delaroche is known for his monumental work, 88 feet (27 metres) long, around the inside curve of a wall of the hemicycle (circular chamber) of the award theatre of the École des Beaux-Arts in Paris (image above, top and middle). The painting was a commission from the architect of the school and portrays 75 great artists from various points in time, focused on three thrones on which the creators of the Parthenon sit, flanked by muses, representing their chosen arts of architecture, sculpture and painting.

The Execution of Lady Jane Grey (images above, third down and detail, bottom), was unusual and caused great interest when it debuted. It was essentially the start of a new genre of painting, combining the refined painting technique exemplified by Ingres with the drama of history painters like Delacroix. It was an event from English history portrayed, in striking scale and realism, by a French painter. It shows the moments just before the beheading of Lady Jane Grey, who, at the age of 16, was Queen of England for only 9 days before being deposed and later executed by her half-sister Mary.

Other paintings of similar subjects, by Delaroche and other French history painters, would follow. These history paintings, particularly involving subjects like the wresting of crowns from one hand to another, along with such juicy subjects as beheadings (you know — entertainment), would prove very popular with the French audience, who saw many parallels to their own history of clashing monarchs.

This painting, perhaps Delaroche’s most famous, and several notable works on loan, are part of an exhibition at the National Gallery in London, Painting History: Delaroche and Lady Jane Grey, that is on display until 23 May, 2010.

There is a nice big zoomable version of the painting here as part of the online material for the exhibition (detail above, bottom); be sure to use the “expand” button (rectangle with 4 arrows) to make the zoomable image full screen. 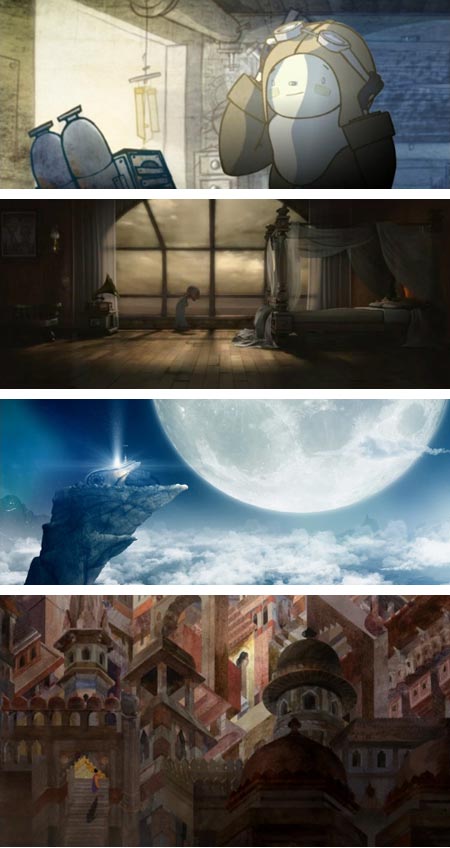 Listicles, part of The L Magazine from New York, is a blog for which every post is a list of some kind, has posted an interesting list of 10 Surreal Animated Short Films.

These are culled from various sources (including the Goeblins Annecy animations) and are a mix of hand drawn and CGI animation.

All of them are interesting, and collectively make for a good bit of amusement and fascination. 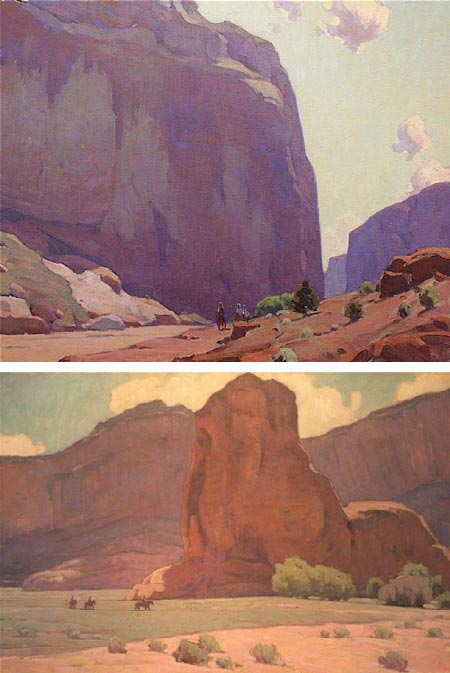 Ryan Wood set out originally to pursue a career in illustration, but found his calling as concept artist in the video game industry, and relegates illustration work to the side. He is currently working for Avalance Software, a game development studio that was acquired by Disney.

Though he does maintain a presence on the Shannon Associates artists representatives site, his blog, woodyart, includes some illustration work but seems largely devoted to his personal projects, with lots of whimsical caricatures, posters, and cartoon-like figures and faces rendered in a relatively finished digital painting style.

His detailed rendering gives his springy, exaggerated characters a fun three-dimensional quality, set off by nicely chosen colors and lots of tactile textures, as in his period piece caricature of baseball legend Honus Wagner (above, top).

There is an older tutorial based on one of Wood’s images created several years ago, that was used as an example by Corel as what was possible in their Painter 6 digital painting software (the current version of Painter is XI).

There is an interview with Wood on the Character Design Blog. Wood is also a contributor to the group Avalanche Software Blog.