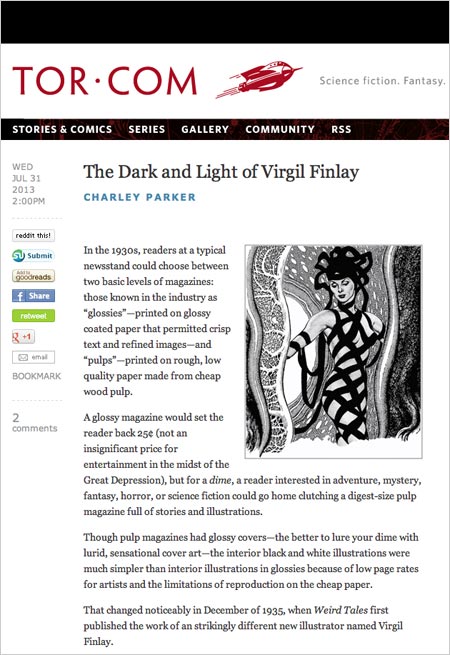 I wrote for them on May on the Fleisher Superman Cartoons. In the new article, The Dark and Light of Virgil Finlay, I give an overview of the great science fiction, fantasy and horror illustrator who had such an impact on the pulp magazines and the field in general.

For the uninitiated, Tor.com is a terrific website devoted to science fiction, fantasy and related subjects, created by the publishers of Tor Books and Forge Books. It features a superb gallery of science fiction and fantasy artists, and insightful coverage of related art topics by Tor’s art director, Irene Gallo.

The site is loaded with features and stories, and the front page acts as a frequently updated and consistently fascinating blog.

This is my page of articles on Tor.com, to which I hope to continue to make additions.

Old Masters, Newly Acquired is an exhibition at the Morgan Library and Museum in New York that showcases recent additions to their terrific collection of master drawings.

You can get an idea of the scope of the show from the brochure preview on the museum’s page for the exhibit.

There is also a selection of images, that while not extensive, is notable for the Morgan’s usual and much to be lauded practice of providing very high resolution zoomable images of the works. Unlike the zooming features on many museum websites, this one allows the images to be zoomed in a full screen window instead of a box the size of a playing card.

Once you click on a thumbnail image to open the larger image in a pop-up, click the odd little button to the right of the controls below the image to expand to full screen, then zoom to your heart’s content (even more than the examples I show above). There are labels for the controls accessible through the Zoom help: Show link.

Old Masters, Newly Acquired is on display at the Morgan Library and Museum until October 6, 2013.

Since I first wrote about Ohio painter Dennis Wojtkiewicz (pronounced voy-KEV-itch) back in 2006, he has continued his large scale explorations of light and texture.

These take the form of close ups of the heads of spreading, multi-petaled flowers, radiant with light cascading across their delicately rendered surfaces, and luminous depictions of fruit — unusual in their presentation as thin, translucent slices rather than the solid forms preferred in traditional still life.

In his depiction of slices of citrus fruits, in particular, his subjects transmit light and color like biological stained glass windows.

In his most recent work, Wojtkiewicz brings us in even closer to his subjects, inviting us to marvel at the delicate translucent tissues of the fruit like glowing alien landscapes.

Wojtkiewicz now has a website. You can choose from several series in a drop-down menu, or simply click on “Works” to see all thumbnails.

I’ll say the same thing I said in 2006 — that I wish I could see his work in person, as it is large in scale, often 4′ (120cm) square or larger, and must be dramatically immersive in a gallery space.

Wojtkiewicz studied at Southern Illinois University and also at the Atelier Neo-Medici in France. He is a professor in the Art Department of Bowling Green State University.

I was delighted recently to have the opportunity to write a feature article for the Summer 2013 issue of Drawing Magazine.

As of this writing the issue is available from the North Light Store, and should be in bookstores and newsstands shortly.

The article, Illustrating Imaginary Worlds, highlights four contemporary illustrators who work in the realm of the fantastic, gives some background on each artist and their working methods, and showcases several stunning images from each.

I have to say that the article, which runs 10 pages, looks great — due in part to the talented editorial and layout staff at at F+W Media, and primarily to the superb images that were provided by the four artists involved: Mark Schultz, Yuko Shimizu, Patrick Arrasmith and Ed Binkley (links to my posts).

I’ve profiled all four previously in Lines and Colors, and was thrilled when they agreed to be the subjects of the article.

When I was looking for a way to arrange the article, I put the artists in an order, not of importance, or even of personal preference, but of complexity of drawing media: pencil to pen to scratchboard to digital. This isn’t obvious in reading the article, but I felt it gave me a groundwork for the arrangement.

Long time readers of Lines and Colors will know that, though I am a big fan of art images on the internet, I find particular enjoyment in the way that artwork in general, and drawings in particular, look in high resolution reproductions in print. One of the treats for me was opening the magazine to see some favorite images that I’d only seen in relatively low resolution on the web on crisp high resolution printed pages.

Unfortunately Drawing Magazine’s online presence is rather thin, submerged in a monolithic corporate website that tries to accommodate The Artist’s Network, Artist Daily, the North Light Shop, and a range of related topics and publications. Individual magazines, which should really each have their own dedicated web presence, are largely lost in the shuffle.

The current page for Drawing has been updated, and includes a gallery of additional work by the artists I feature in the article.

If you aren’t familiar with Drawing Magazine, you are missing out. I’ve long felt that it is unfortunate that drawing, as an art form and as an array of mediums, doesn’t often get it’s due — partly because it’s difficult for museums and galleries to physically display works on paper due to the inherent problems of light damage, but mostly because museums, galleries and publishers consider it less “sexy” than painting.

I was really pleased when I first encountered Drawing Magazine years ago, even if it was simply because a magazine was paying long overdue attention to drawing and related subjects. I was even more pleased when it became obvious that not only were they covering the subject, they were dedicated to doing a superb job — with articles on contemporary and historic artists, tools, techniques, current exhibitions and thoughtful explorations of all aspects of the art form.

The new issue, in addition to my article, features an article on illustrator Edward Sorrel, reviews of several exhibitions, including a feature article on Hopper Drawing at the Whitney, articles on drawing from the television screen and using digital image editors to improve compositions in traditional media, part II of an overview of drawing materials, a feature on two artists who work in markers and a selection of top drawings from the Georgia Museum of art, selected by their Curator of European Art.

The Summer 2013 issue of Drawing Magazine can be ordered from the North Light Store, either for physical purchase or digital download, for $8.99 US (I don’t know about international orders, but I believe they are available).

I wish I could point you to a web presence that was a better representation of the quality and features of the magazine, but in lieu of that, seek it out on the magazine shelves and look for yourself.

Early in his career, eighteenth century French painter Hubert Robert fell under the spell of the ruins of ancient Rome — their scale, suggestions of past grandeur and contrast with his modern times. Partly this was from his own experience while living in rome for eleven years, and partly from exposure to the similar fascination with Roman ruins in the work of Giovanni Battista Piranesi. So fascinated was he with Piranesi’s depictions of ruins, both real and imaginary, he earned the nickname Robert des ruines among the circle of Piranesi’s followers.

While in Italy, Robert did numerous location drawings. When he returned to Paris, his work — in which he spun off form the actual ruins a series of fantastic interpretations — was well received. These fantastic views often were suggestive of immense scale, contrasting tiny figures with the size of the monumental ruins. (If you get a chance to visit Rome, you’ll see where this comes from.)

His paintings were often large and quite detailed. You can best appreciate them in high resolution images on Google Art Project, the Met Museum and other sources. I also have featured a few as Eye Candy posts (listed below).

Robert was prolific, and produced landscapes and interiors of art galleries in grand scale as well as his fantastic architectural views.

In the Metropolitan Museum of Art. Use Fullscreen link.

One of Eakins’ fascinating exercises in river surface perspective on the Schuylkill River here in Philadelphia. This area of the river is still commonly used for sculling, though the bridges and the banks of the river have been altered since Eakins’ time.

Eakins painted a series of compositions with similar themes. He himself was a sculling enthusiast, and has here depicted himself rowing in the scull beyond Schmitt’s.