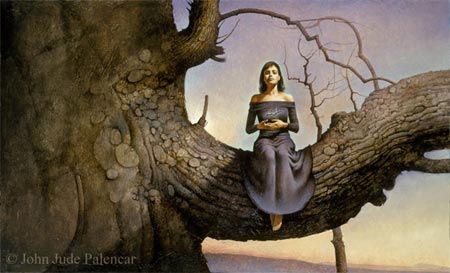 Many artists try to flood their images with light; others allow intermittent bursts of it within a framework of darkness. In John Jude Palencar’s fantasy themed illustrations, light seeps in, like some kind of oily liquid making its way through forgotten cracks. Once light has found its way into his images, it simmers and squirms as if skittering across frying pan. Even his brightest lights feel like they’re being held back by some secret force, a hidden gravity.

His images are steeped in atmospheric effects that feel more like emotional density then mere mist or haze. Carefully chosen colors and tones pull you inexorably toward whatever point of focus Pallencar intends, the eye is helpless to resist.

But light and color are not the real spell being cast here. Through all of his work, under it, over it and pervading it like a scent, is texture. Texture is everywhere, no surface is without it, the air seems textured. You begin feel that Palencar’s light itself is textured.

Palencar’s remarkably evocative paintings can veer from the horrific to the beautiful, and often embrace both artistic deities simultaneously. Central in subject is the human form, often isolated or even floating above a surface, wrapped in light and texture, as solidly three dimensional as a stone in your hand, as ethereal as an idea.

His gallery paintings are in a similar style, tempered with an enigmatic choice of subject matter. There is certainly a hint of Dali in his work, but it’s not the overt “strangeness” that some painters are quick to be influenced by; in Palencar’s case, it seems he sees through Dali’s lens to his influences, and dips back into the rich well of Valezquez and the visionary and disturbing paintings of Bosch and Breugel. There is also a touch of Arthur Rackham and perhaps a dash of Howard Pyle as well, a bit of heroic monumentality about his weirdling souls.

I haven’t covered Palencar until now because I’ve been waiting for a while for his new web site to go live. It has (I’m not certain just how long it’s been up), and I’m pleased to see it not only includes a good selection of his illustrations and gallery art, but drawings as well, including preliminary sketches for some of his paintings.

A collection of Palencar’s work, Origins: The Art of John Jude Palencar was released earlier this year. Irene Gallo also has a nice post about the book here, with some shots of the pages.

You’ll find numerous references to Palencar’s work around the web, including many to the book Eragon, within which the young author Christopher Paolini named one of his key mythical places Palencar Valley, well before the artist was called on to do the cover.