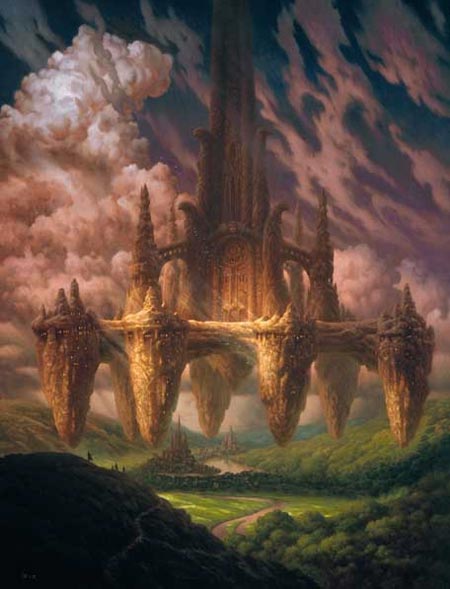 Before relocating to California in 1996, French artist Christophe Vacher worked for Disney’s Paris-based animation studio, painting backgrounds for features like The Hunchback of Notre Dame. (I want to know how the pitch meeting went for that movie. “Hey, I’ve got a great idea, let’s make a cheerful animated feature about… The Hunchback of Notre Dame! Sure! It’ll be a musical, with singing gargoyles…)

Anyway, it wasn’t Vacher’s job to figure out how absurd the idea was, just to make the backgrounds look great; that he did, and continued to do for movies like Hercules, Tarzan, Dinosaur and Treasure Planet.

He left the studio in 2000 to devote more time to gallery paintings, but has continued to freelance for film studios as well as illustrating covers for books, CD’s and video games, with clients like Dreamworks SKG, Harper Collins, Wizards of the Coast and Data Becker Videogames. He returned to Disney to art direct an animated segment for the upcoming live action film Enchanted, and is slated to art direct a new 3D CGI movie produced by Tim Burton.

The galleries on his personal site are divided between movie backgrounds, personal work and covers, though I can’t give you direct links because the site is in frames. The “Personal” gallery also includes some pencil sketches.

Vacher’s personal work tends to be fantasy oriented and often deals with beautifully rendered images of monumental objects, fortresses, walls or cliff-like chunks of rock, floating in defiance of gravity, much in the vein of Magritte’s Castle of the Pyrenees, but on a more dramatic scale. He also favors dramatic large scale landscapes, fantastic cloudscapes and graceful angel-like figures.

Vacher paints in oils alkyds and acrylic. He list among his influences the painters of the Hudson River School (see my post on Frederic Edwin Church), the Romantics and the Symbolists (see my posts on Caspar David Friedrich and Arnold Böcklin), who he admires for their grand scale theatrically displayed scenery.

Vacher’s work has been featured in the Spectrum collections of contemporary fantastic art, including being chosen for the cover of Spectrum 10, and is included in The New Masters of Fantasy disk-based collections.

There is a step-by-step process of one of his paintings on GFXArtist, and a nice additional gallery of his work on the TenDreams site.