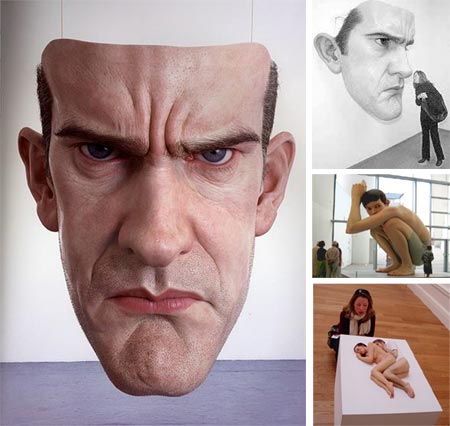 I don’t often devote a lot of attention to sculpture, but, as I noted in my recent post on Claes Oldenburg, one of the things art does at its finest is to shake up our preconceptions and show us the world with fresh eyes.

Ron Mueck’s astonishing sculptures of ordinary, non-heroic people do just that. Usually unclothed, his figures are strikingly realistic in terms of the physical appearance of flesh, hair, and the textures and colors of human beings; right down to finger and toenails, blemishes and moles, goosebumps, individual head and body hairs inserted one by one, and the appearance of superficial veins beneath the skin.

Life-like replicas of human beings, no matter how realistic, would not in themselves necessarily alter our perceptions. Mueck does that by ingenious manipulation of scale. His spookily human sculptures are not life size. Some are gargantuan, others slightly larger than life, like his eight foot high standing pregnant woman, some are quite small and others are about half life-size, like his startling sculpture of his dead father, which helped establish his reputation as a gallery artist.

Mueck’s sculptures are made of fiberglass and silicone and crafted with techniques Mueck acquired in his previous career as a special effects artist, working on such films as Labyrinth.

You may have seen mention on the web of his earlier, somewhat grotesque, giant babies, but I think his more recent and sophisticated work is much more interesting.

In 2006 the National Gallery in London invited Mueck to become an artist in residence and create sculptures inspired by works in the museum’s collection of old masters. There is a half-hour documentary that gives a brief overview of Mueck and his work and follows him through the extensive and painstaking process of creating his sculpture of the standing pregnant woman.

Even in photographs, the realism and the element of scale make Mueck’s work striking. I haven’t had the chance to see his sculptures “in the flesh”, so to speak, but the effect must be startling.

Note: Some may consider his realistic depictions of naked humans NSFW.