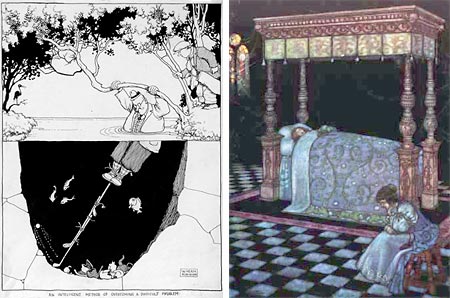 William Heath Robinson wanted to be a landscape painter. Even after his study at the Islington Art School and later at the Royal Academy, he came to the realization that he could support himself better by following his brothers Charles and Thomas into the burgeoning field of illustration. (See my post on Charles Robinson.)

The Robinsons were part of the generation of artists that flourished in the Golden Age of illustration, along with artists like Franklin Booth, Maxfield Parrish, Arthur Rackham, Edmund Dulac, J.C. Leyendecker and Elizabeth Shippen Green.

Though he created beautiful illustrations for classics like Beauty and the Beast, Bluebeard, Little Red Riding Hood, The Red Shoes, and Sleeping Beauty (image above, right), he achieved widest notice for his humorous drawings and cartoons.

Robinson created cartoons of life prior to, during and after the First World War. He drew numerous cartoons depicting the follies of golfers; like the one above, left, in which the protagonist is trying to “play it as it lies” with a contraption of strapped together clubs, demonstrating the kind of visual invention for which Robinson became a household word.

Robinson drew countless “inventions” in which overly complex gadgets and bizarre devices were employed to accomplish otherwise simple tasks. Here in the U.S. this kind of inventive visual absurdity is associated with later drawings by Rube Goldberg, but in the U.K. they were simply called “Heath Robinsons”.