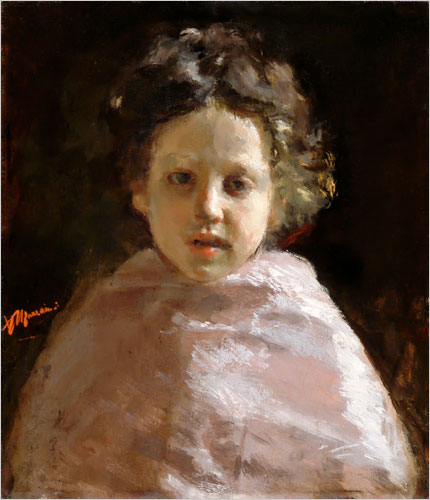 Mancini was an Italian painter who was so gifted at drawing as a child that he was admitted to the Naples Academy of Fine Art at the age of 12. He was producing accomplished large scale paintings four years later.

His career, though, would be troubled, marred by bouts of mental illness, poverty and emotional instability. The following description of his manic painting methods is quoted from the collateral prepared for a show currently on view at the Philadelphia Museum of Art:

There at the back, before a little table on which I see scattered an infinity of bric a brac, cloth flowers, embalmed stuffed birds, an inexpensive doll, there is the model Aurelia, an insignificant type of woman with olive complexion and an aquiline nose. She was posing as a vendor. Mancini, in shirt sleeves, extremely nervous, bustled about delivering brush strokes, that resembled blows of a whip, onto a canvas supported on the back of a chair. He snorted, he muttered to himself, he cursed at the model who wasn’t able to remain still, then he quickly distanced himself from the subject and bent down on his knees. Plump and not too flexible as he was, he stooped down and withdrew from his pocket binoculars which he used to view her in reverse. All of this while panting out of breath, and raving like someone obsessed.

The account goes on to add that Mancini’s elderly father added to the scene by standing off to one side, badgering him the whole time to put down his brushes and go to dinner.

Mancini was also so poor at times that he didn’t have proper clothing and reused his art materials. One of the pieces in the Philadelphia Museum show, which is the first major retrospective of his work in the U.S., is mounted so that you can see his painting on both sides of the same piece of canvas (one side of which is unfortunately upside-down from our point of view).

He was in a way rescued from his poverty, which was to some extent caused by naivety, by Sargent, who introduced him to English society patrons who paid to have his extraordinary style applied to their portraits. Sargent also painted a portrait of Mancini.

Mancini’s paintings are wonderful and eccentric, with thin veils of paint that barely mask the canvas in one area and huge gobs of impasto, looking like they have been chunked onto the canvas with a spatula, let alone a palette knife, in others. “Painterly” is an inadequate word to describe the way paint is scooped, mounded, troweled and scraped across the canvas in places, yet the same image will have passages of sublime modeling and blending.

One of the other remarkable characteristics of his paintings is his use of what he called a “graticola”, a grid method; in which a mesh of rectangular areas produced by threads strung across a frame were used to interpret a scene by using a similar grid against the surface of the canvas.

This was not an unusual method in painting and has been known for hundreds of years, you will often see preliminary sketches in which the gridlines show and lay the groundwork for transferring a sketch to a larger canvas. What is unusual is that the gridlines that are usually only in the drawing stage of the larger works, and are gone when paint is applied, have left their marks embedded in the thick layers of paint in Mancini’s final paintings, along with bits of glass, stone and other items he worked into his canvasses for texture and effect.

Mancini’s wild, intense and ultimately beautiful canvasses are striking on a number of levels, the application of paint, the use of texture, and the sometimes unusual surroundings for his subjects. He also often used street urchins for his models, in some ways mirroring his own economic circumstances, both as a child and as an adult.

The exhibit at the Philadelphia Museum of Art only runs to January 20th, and includes wonderful loans from some of the great museums in Europe, but it was assembled in honor of a gift of 15 Mancini oils and pastels to the museum’s permanent collection.

There is a book accompanying the exhibition (more details here).